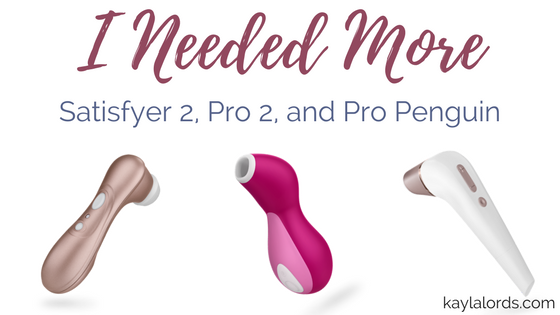 “I’m going to try a different sex toy each night and decide which one I like most.”

These are the conversations you have when you’ve got nine toys lined up to try (all received in exchange for honest reviews). Three were from the same brand: Satisfyer. What better way to find a favorite than to try a new one each night?

Naked, in bed, on my special come towel (as you do), and I was afraid to touch myself or turn it on. Thankfully he’s always game for kinky fuckery like this. Kneeling between my open thighs, he pulled back my clitoral hood, placed the Satisfyer Pro 2 in place, and turned it on.

The first setting was nothing in terms of stimulation. The second was okay but nothing happened fast enough. The third? Oh holy hell. Being the greedy girl I was, I demanded the next setting, and I felt like a mini-jackhammer was trying to rip apart my clit. No, no! We started again and went with setting 3. I came. And came.

I don’t just want to come. I want the build-up, too. This time I went for a bit of patience and setting 2. Pleasure built, slowly but surely, spreading out through my center and down my legs. John Brownstone, now next to me, reached over and played with my nipples. It was what I needed. When I came, it was in another great gush, but I was screeching and writhing with it.

It didn’t take long before my sensitive clit was no longer feeling pleasure but pain. I tossed the toy to the side. Now it was just too much.

The next night, it was time for the Pro Penguin. Small and an easier fit in my hand, I thought I might like this one better. My babygirl self thought it was just Too Cute!

I wasn’t nervous this time. I knew what air tapping on my clit felt like now. Holding it against my body, I began to play with the settings. One was too low. Two wasn’t enough. Three was better.

And by better, I mean that within moments my body convulsed and shuddered. My pussy spasmed. I could feel my cunt opening and closing. John Brownstone, kneeling between my legs to watch, gasped.

“You’re creamy as hell down there!”

But also, not great. The build-up wasn’t the same. I got the end result but none of the journey.

I tried it the next morning in the shower because it’s supposed to be waterproof and amazing in water. It seems to be, but the angle was bad for me. One small orgasm and then nothing.

The third and final try, the Satisfyer 2 looks like something out of an old science fiction movie. It should shoot lasers or something. Instead, it shoots air.

On this one I needed setting 4. I came but it hurt a little because the setting was just a little too high. It wasn’t gushy. It wasn’t bone-crushing. The orgasm appeared and vanished.

He was only too happy to press a toy into my clit for me. Switching the angle of the toy might do something different – that was my hope at least.

Nothing. I was like Baby Bear – it was either too much or not enough, no matter what setting he tried.

“If I have to pick a favorite of the three, it’s the Satisfyer Pro 2.”

About the Satisfyer Toys 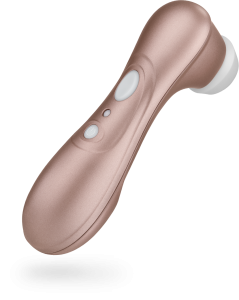 The pulses of pressure felt strange, and when it was too much, it really hurt. The localized stimulation was kind of a block to the rest of my body. Without external stimulation from John Brownstone, I felt no real pleasure. Just the mechanics of an orgasm.

I want the pleasure. I want the build-up. The release is nice but when it’s removed from my head and the rest of my body, it’s completely unsatisfying.

Here’s what I liked about all three:

I don’t reject the Satisfyer line as bad toys. They just aren’t for me. While clitoral stimulation is important for me, it’s not the only thing I need.

Want to know more about the Satisfyer toys? Click the links below.