This post contains affiliate links. That means if you click on a link and make a purchase, I make a small commission.

“How does this thing work?”

We lay naked in bed, turning our newest toy (Crescendo by Mystery Vibe) over and over in our hands. John Brownstone pushed the button to turn it on while I read the instructions.

He jumped and gasped. I synced the toy with my phone. I focused on my phone while he found a new position for the Crescendo – he pressed it against the very sensitive patch of skin under his balls.

He moaned. He jumped. His eyes lit up.

And that was just the first setting.

As I went through each setting, he tried new positions. The stronger the vibes, the stronger his reaction. His eyes were glassy; his eyelids low. Then we got to the final setting.

His body arched up off the bed, and his cock swelled even more. His breathing hitched as his eyes widened. Oh, we’d found the right one.

“Are you planning on fucking me or do you want to come right now?” I can’t believe I’d asked such a thing, but controlling the vibrations and sensations filled me with a sense of power.

“Oh yeah, I’m fucking the hell out of you, but first…” With some hesitation, he pulled the toy away from his body and handed it to me.

For once, I was the methodical one. While he played with the phone app, I bent the Crescendo into position. One end inside against my g-spot, the other resting against my clit. Let’s see what this puppy could do.

“Let’s go through each setting this way, and then I’ll change the position.”

The first few settings were pleasant. My body tingled. My toes curled. Laying in bed like this wouldn’t be an awful proposition.

Then he landed on one that made me jump a little. Each point along this toy buzzed and thrummed in all the right places. He continued scrolling. It all felt good, but not enough to orgasm.

Until we got to one called Power Edges. Nearly all the sensations now concentrated on each end. My g-spot and my clit took the brunt of the vibrations. Ohhhhhh yessssssssss.

He continued through the cycles – Pulse Max turned my insides to jelly. Big Tease got me worked up even more. And then Power Max, the same one that got such a big reaction out of him.

I screeched and squealed. My thighs clamped down over the toy. Best thing I’ve ever done. The sensations around my clit intensified. I shuddered through one orgasm. Then a second.

“Holy hell!” I gasped, opening my legs and pulling the Crescendo out of my body with a sucking sound. “Ok, next round.”

He went through each setting again from the beginning. They were pleasant but not as nice as the first round. I glanced over and watched him stroke his cock. My mouth watered.

I quickly realized my favorite setting was the last one – the highest and strongest (of course). Closing my thighs over the toy, I was able to press it more firmly against my body.

Waves of pleasure rolled through my body, small and slow at first but quickly gaining speed until the orgasms washed over me. I pressed the toy harder against my pussy, ignoring the thrums against my hand and forced one, two, and then a third orgasm, crying and moaning as the pressure built higher and higher, each climax more painful than the one before, until

“Enough! I can’t take any more!” I threw the toy down on the bed, panting and sweating, my body still quivering.

John Brownstone snatched it up and put in his newly favorite position – under his balls – and kept it on Power Max. With a growl, he grabbed me and pulled me against him, sliding into my wet and willing slit.

Each thrust was powerful, forceful. He held my neck in a bruising grip. I swear I could almost feel the vibrations deep in my own body through him.

“Fuuuuuuuuuck, I feel it from my balls all the way through to the tip.” That was the last coherent statement he made for a while.

He fucked me hard and fast until his body tightened. A long, keening, wailing moan filled the air. When I thought he was surely done, his body bucked again, his voice was higher.

When we both finally came back down to earth and found our voices again, I heard him say, “I’m keeping this one close by from now on.”

About the Crescendo by Mystery Vibe

Mystery Vibe calls the Crescendo (affiliate link) “Your pleasure – personalized” and they aren’t kidding. You read that we bent this thing multiple times. Yep, it’s a flexible toy meant to be put into different positions so that you get the sensations you want where you want it. Let me point out that it’s not to be twisted which would kill the technology inside. It uses a charging base for it’s power instead of batteries or cords. The Crescendo is light-weight and unassuming to look at, but damn if it doesn’t pack a punch.

And I know why it’s called the Crescendo. Each setting you try through the app is paired with music tones (which you can mute, no worries) but the vibrations almost run up and down as a musical crescendo. You get sensations, thrumming, and vibrations from one end to the other.

While you can use this toy manually, I loved having the app. You sync it up, and then scroll through the settings, stopping when you find one you like or moving on to the next. No surprise to me, I liked the strongest vibrations that covered the length of the toy – especially when I bent it and inserted one end.

If you find a setting you love, set your phone down and enjoy. According to the website, you can get other vibe tones from the always FREE Vibe Store. You can also use your own music and create “playlists” of the vibe settings you love best. More features are coming soon – like letting your partner take control of it from their phone.

Because it’s bendable and designed to be used by anyone, I can’t tell you which settings are “best” – it all depends on how you bend the Crescendo and where you put it. Check out this diagram of ideas on how to use your Crescendo: 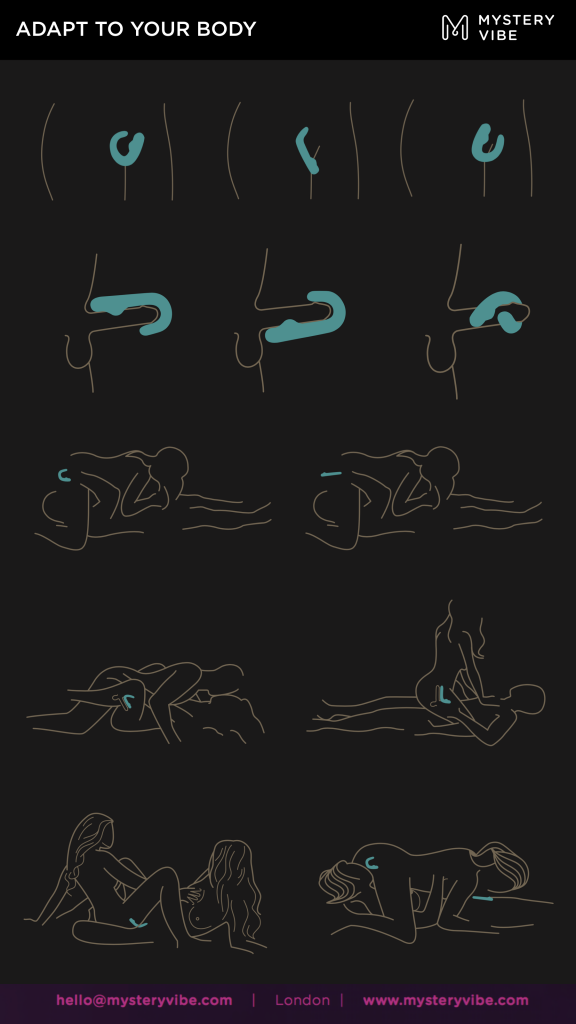 This one small toy is highly customizable.

I can honestly say the Crescendo has made it to our list of toys that we recommend and will use again and again.

Want to check it out for yourself? Get the Crescendo by Mystery Vibe (affiliate link).

Update: 11/27/16 to share that the vibe store is free and the new recommended ways to play.