Then he sent an excerpt and I was completely blown away – and squirming in my chair in the best possible way.

Take a look at his release, Pendulum, and see if you don’t have a similar reaction. 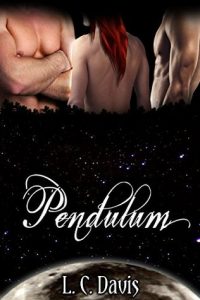 When Remus is entered into the Lodge’s annual Alpha’s Pet contest against his will, he finds himself thrown to the Wolf Pack, the very type of men he needs to avoid. What’s worse is that the wolves immediately label him a submissive, something he swore he would never be again. Things get even stranger when “wolf” turns out to be far more literal than Remus ever imagined. When both the next-in-line for Alpha and his outcast brother claim Remus as their own, the entire pack is thrown into chaos.

Can Remus learn to embrace the power of submission and choose between the brothers before their rivalry tears the pack apart, or will the tension between them unravel his own sordid past?

“Red,” I gasped when the heat building between my legs became too much temptation to bear.

Victor’s eyes narrowed furiously. I’d never seen him so angry, not even after he had learned about his brother’s mark.

“Red?” he snarled. “Red is for ending a session. Red is for when you’re past your breaking point. It is not for you to throw around when you’re simply uncomfortable or something has annoyed you. Do I make myself clear?”

He was leaning over the table, his hands planted on either side of my head as he snarled in my face. I fought the urge to close my eyes or turn away, knowing that would only bring more fury. “Yes, Master.”

He took my face in his hand. Even when he was being rough, his every movement was controlled and every ounce of force calculated. “Now, tell me, pup. Did you really mean to say red?”

“N-no,” I stammered, trying to shake my head.

He stared me down for a moment, his jaw set. “I didn’t think so.”

He released me and I let out the breath I hadn’t realized I had been holding. “If you ever misuse a safe word again, I will end more than just our session. It’s too crucial to the dynamic between master and submissive. At the very least, I demand that my submissives are capable of telling me when they truly can’t handle something. If you ever cry wolf in my dungeon again, it had damn well better be with your legs wrapped around my waist and your nails dug into my back begging me to fuck you harder. Do you understand?”

Whether it was the yelling, the subject matter, or simply my celibate lifestyle for the past couple of months, I was deeply, embarrassingly aroused. It was only a matter of time before he noticed. It wasn’t as if I could hide it with my arms and legs splayed out and locked up.

“We’ll move on, then.” He gave me a knowing once-over. “Your disobedience is racking up. Instead of a slew of little punishments, I’m thinking that one big one will have to do.”

I gulped. That didn’t sound good, but at least he wasn’t paying attention to the bulge in my leathers anymore.

Victor pulled a black silk scarf from his pocket and flicked it with the sleight-handed expertise of a stage magician. I squirmed when he came towards me and tied it over my eyes, blocking out all but the blurriest traces of light.

I heard his footsteps travel behind me and I awaited my fate in quiet desperation. The table jerked violently and I was plunged forward into an upright position. When I was sure I was going to fall, the table stopped at a slight incline, almost perpendicular to the floor.

“I’m here.” Victor’s voice came from right in front of me. “Bad pups don’t get warnings.”

“There, there,” he said, clearly pleased with my unintentionally pup-like sound. He stroked my face as if he were soothing a beloved pet. “I’m not angry, not anymore. You’ve simply got to learn to be a good boy.”

Get your copy on Amazon

L.C. Davis has been writing since he can remember. He started out jotting down tales about his imaginary friends in spiral notebooks and on an old typewriter. Since then, he’s upgraded to a laptop but he still prefers the company of his characters to 3D people most of the time. As a transgender author, L.C. is dedicated to increasing trans visibility in the romance genre one supernatural tale at a time.

When he isn’t watching 90s sitcoms and Sci-Fi with his partner, you can find L.C. attempting to write while his two cats and fluffy lunkhead of a dog vie for his attention. He enjoys getting feedback from readers and can be contacted on Goodreads or his website at www.luciencaindavis.com.