Many bloggers find that the more they write, the more they have to say. Sometimes it’s advice, sometimes it’s more in-depth looks at their own psyche, and sometimes it’s fiction. I love watching bloggers I’ve followed for a while grow and expand their horizons. When my blogging friend, known to many as Desiring Discipline, asked me about self-publishing her new book and then told me she’d finally hit “Publish,” there was no way I wasn’t going to pimp her out.

Writing as M.B. Allyn, she’s already got two books of her series published and available for purchase on Amazon. Today, I’d like to introduce you to the Omani Destiny Series. Check out the series and the books, read the excerpt, and if it sounds good to you, you know what to do.

About the Omani Destiny Series

Omani Destiny is a historical romance of epic proportions. The five-book series weaves an exotic and erotic tale of foreign intrigue and strong sensual passions over a 50-year period. Its characters move through a world of intrigue and secret obsessions in settings like the Sultanate of Oman, Paris, Greece, and Washington, D.C. The main characters provide a picture of deep inner struggles with good and evil, passion and self-control, pain and pleasure. Rich with the languages, people, cultures, landscape and customs of all these locations, this riveting series will pull you in and transport you to new worlds. This is the must-have vacation read of 2016! 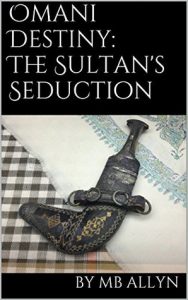 As a young professional woman of 23, Theresa Brown is already weary of boring suitors and her predictable Washington desk job at the State Department in the 1960s.  Her dream of travel to far-away and exotic places takes on storybook proportions when a chance meeting with an obscure Middle-Eastern dignitary catapults her into a whirlwind of political and strategic machinations that would forever alter her life, and generations to come.  The US Government brokers a secret, ignoble deal to allow the United States access to one of the most strategic geographical locations in the world, the mouth of the Persian Gulf.  A saga of fierce obsession and addictive proportions ensues between the Prince and Theresa.
Theresa struggles to fully submit to his hypnotic passions and will, yet finds Hamir’s dominance and forceful ways compelling as she battles to understand the conflicting and seductive emotions of a world of pain and pleasure, independence and submission.  Diplomatic immunity is meaningless when it comes to Hamir’s obsessive desires and darkest manipulations to keep Theresa Brown in his life.

Theresa Brown faces the timeless issues and choices of women in the latter part of the 20th century:  the lure of becoming a sexually liberated career woman seduced by forbidden romance, passion and sexual experimentation; or, accepting socially acceptable roles as wife and mother in a safe and predictable life, while hungering to rekindle identity and passion. 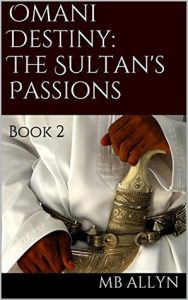 Theresa has found salvation from her tumultuous plight with a good and decent man who loves and cares for her, and she experiences the joys of motherhood in a stable and safe life. Yet despite the calm she finds with her husband, and motherhood, her plight and past is destined to stay close at hand. Hamir is ever-present as he lurks always close in pursuit of Theresa’s passions, and demands what has been taken from him. As Theresa’s children grow and find their own paths, it seems that Theresa’s past is conspiring to continue to pull at her and her family, involving turmoil and life-changing decisions with long-reaching consequences for all.

Excerpt from The Sultan’s Seduction

In the private dressing lounge, she tried on a beautiful, buttery soft decollatée cotton dress of flame red which offered a modest peak at the swell of her breasts, and a pair of designer jeans that clung to her long legs like a second skin, each meeting with Hamir’s approval.  She picked out a silk shirt, and a pair of comfortable leather shoes, each time looking at the price tags and mentally wondering if she’d top out her credit card limit.  Hamir caught her at this and reprimanded her.

“What are you looking at?  Don’t you know it is very rude to want to know the price of a gift?”

“Gift?” she echoed, never for once expecting that.  She needed the clothes, as most of her things were becoming too tight after a few months of rich foods and sedentary lifestyle in Oman.   Sure, Yves was extravagant, but where would she spend this money in Oman?  “Hamir, I can’t accept” he cut her off, almost angrily.

“Do not insult me, Theresa.  We will not discuss this here.  I wish you to have whatever you like, and you will upset me greatly otherwise.”  She looked at him incredulously, but was silent.  If he didn’t want her to pay for the clothes for appearance sake, they’d work it out later.  The sales woman brought a beautiful blue satin gown to her that Hamir had picked out.

“Oh, mais non!  Je n’ai pas besoin d’une telle belle robe!”  she shook her head, denying her rapt expression over the beauty of the dress.  Hamir told her to try it on, explaining that they had an invitation to a formal party that weekend and she’d “need” it.  The last time she “needed” a formal gown was at her coming out party.  She grinned and went into the dressing room.  It was gorgeous, it molded to her upper body and clung to her breasts softly, yet flared out elegantly to the floor and was cut in the back down just above her buttocks, showing off the two dimpled areas of her lower back, right above the cleft of her derriere.  She demurely walked out to Hamir.  His shining eyes said all that was necessary.

He told the woman to wrap everything, throwing a satin robe on top, and whispered something to her.  The woman smiled slightly and nodded her head.  He turned toward Theresa and spoke gently, having had some time to consider that she was an independent American woman who wasn’t used to being spoiled.

“Theresa, please understand that it greatly pleases me to spoil you, and this is such a little thing, really.  I want you to allow me this happiness,” he said earnestly, brushing his thumb across her pouty lips.  She looked at him seriously, when a smile slowly crept across her face.

She flung her arms around his neck and whispered “Thank you Hamir, everything is so beautiful.  But what about you?”

He smiled and kissed the top of her head.  So nice to have a woman appreciate these small trinkets and to be concerned for him as well, instead of sneeringly accepting them as most of his hibrow jetset ladies did.

“I have plenty at the flat,” he replied.  “And what of your perfume?  Might we find it while we are here?”

She frowned now.  “Which perfume?” she asked.

“Your scent of roses, Theresa.  I have missed it,” he said.  She smiled and then laughed a little with irony.

“Oh, I don’t think in Paris we’ll find that… unless there is a discount drug store.”

“I don’t understand,” Hamir replied, now feeling foolish that he admitted he liked it so, and that she had laughed at him.  It was a scent that would always remind him of Theresa, even when he passed by fragrant rose gardens.  She now smiled sweetly and gently caressed his face, a sensation he was not accustomed to from a woman, but which he thought he might like.  Her touch electrified him, and he was growing impatient to have her.  It truly had taken all the self-control he could muster not to ravage her on the jet.

“Oh, my dear, I am a very simple girl, and you are spoiling me beyond my wildest dreams!  My scent of roses was merely an inexpensive bath oil and lotion I used to buy in the United States.  I’ve run out of it, and you don’t have this in Oman, that is why you’ve missed it,” she soothed his ego.

“Ah, well I will import cases of it for you when we return!” he promised, as she smiled and turned to the dressing room to change back to her clothes.

As she slipped off the gown and hung it on the hook and stood only in panties, she lifted her eyes to the mirror in front of her as she heard the door to the large changing room open.  She already was getting used to the nonchalant attitude of the Parisian sales clerks who had passed in and out of the dressing room without batting an eye at her states of undress.  But she was now surprised to see Hamir in the mirror behind her, and she impulsively moved to cover her bared breasts with her hands.

As her mouth began to open to ask why he was there in her dressing room, he stepped right behind her and firmly removed her hands from her breasts and began caressing them as both their eyes watched in the mirror.  It was incredibly sensual to watch his burnished hands stroke her creamy breasts, but so aware of the public place, she was alarmed at his bold actions.

“Oh, Hamir, just a little longer my dear…” she whispered as the rest of her body betrayed her words.

“Not here!” she responded, as his hands now slipped over her belly and dropped between her legs and peeled her panties off.  His hands ran over her back, down to the dimples that had shown with the dress, laying soft kisses on them.

Get Your Copy on Amazon

M.B. Allyn likes to think of her work as “50 Shades with  a brain.” She appreciates what 50 Shades did for kink, erotica, and its breakthrough success, but she wants more. The Omani series is her answer. Her writing is a blend of erotica, historical fiction, romance, saga, suspense, and sexual experimentation and psychology.