The first time we tried our new toy, I found myself on all fours on the bed. Ass jutting out, pussy begging for…something, anything, whatever he could give.

He’d spanked me until my skin burned at the slightest touch.

He’d pulled my hair until my scalp was raw.

He’d fingered my cunt, teasing and torturing my body until the only noises I was capable of making were whimpers and moans.

Then I heard a low buzzing.

He pressed something soft against my slit. Mmmmm, that felt good. He pressed a button. The buzzing decreased. Nice but not enough.

Then, he found it. A bzzz-bzzz-bzzzzzz-pause rhythm that soon had me pushing back, spreading my knees just a little more, inviting him in for more.

Instead of complying, he reached around and pinched my nipple.

Now the vibe was back on the high pulse and he began smacking my ass. First one side, then the other. Then he picked up the paddle. He settled the smooth vibe on my clit with one hand and began landing blows with the other.

I don’t remember much after that. There was ice. The vibe was inserted. I didn’t love that feeling, but I may have needed lube. The night ended with two sweaty messes collapsed on the bed, so it was a good night.

This new toy, the Lava 3 in 1, was a curiosity to me. Each toy I receive seems to be on the high-tech side. Since I adore vibrations, that’s never a problem, but I needed to know what I could do with it especially since it comes in four parts.

Unfortunately, we haven’t had time to play in a while. But I was determined. I wanted to see what this baby could do when I was the one driving.

“Daddy, tonight, I’d like to play. In the name of research, of course.” Bat the big brown eyes. Nod slowly. Look convincing.

I went with the purple head. You know I did because purple. With a slightly bulbous end, I figured that would feel sweet on my clit. Oh, and did I mention the warming feature? Oh yeah, the damn thing warms up to give you the sensation of being touched by flesh.

Legs spread, vibe at the ready, I started with the highest setting. Oh yeah, that felt good. Gentle. Nothing like my trusty Hitachi. An orgasm wasn’t going to be ripped out of my body, not anytime soon at least.

I moved it this way and that. I ran it over my slit. I considered pushing it in and fucking myself, but what I really wanted were a few good wet, clitoral orgasms. Bone-melting orgasms.

Playing with the settings, I realized the first one (a high-ish, constant buzz) was best. Before I knew it, I was thrashing around on the bed, grasping empty air, digging my heels into the mattress. One orgasm, then another. I happened to look over and realized Daddy was propped up on his side watching.

Then I forgot him again. I clamped my thighs together, sucking the vibe deeper against my body. Another. And another. This wasn’t a violent climax, but a slow burn that had finally boiled over. Oh yesssssss.

That’s when it happened. He grabbed me, pulling my ass into his groin. Spooning on the bed, he sunk his cock deep inside. I didn’t move the vibe. Instead, I pressed it more firmly against my body. Each time my pussy spasmed, he gasped and I squeaked.

Finally, as he gripped my hair and hips, I let go of the vibe and held onto the bed with both hands. My strength was gone, my bones melted and gone. When he finally came, I barely registered his growl. 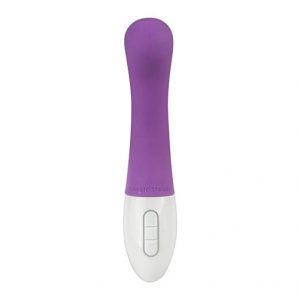 Okay, so as I mentioned above, the Lava 3 in 1 by Intimate Melody (which yes, I received in exchange for an honest review) comes in four parts, a base that you charge and three interchangeable heads (two vibes and one bullet). The vibrations are mild compared to things like the Hitachi, but that’s not a bad thing. It means that (for me) the orgasms build slowly and that they can be forced even more. I held that damn thing against my clit for several moments, coming over and over again. It was great.

I’m an impatient girl so I don’t love the slow build of the first orgasm, but once I was close to climax and over the first one, it was definitely pleasurable. And really, I’m not sure why I don’t think of using a vibe while he’s fucking me more often.

The issues I had were minor but worth the mention.

The buzzing from the vibe was a little overwhelming at first and after I’d held it for 20 or 30 minutes. (I’m sure you’re probably not supposed to hold it that long, but this was for “science.”) When I was in the middle of multiple orgasms, I didn’t notice or care about how the vibrations made my hand feel. My hand ached when I was done. That could be because I had a tight grip or from the vibrations.

The base is a really tight fit. That’s not a bad thing, until you’re ready to take it apart. I couldn’t do it by myself and needed Daddy’s help. I fully admit to being a weakling so that could just be me. But it also means I’m not playing by myself without prior preparation.

While I was using it, it held enough of a charge to last, which was nice. Turning it off and leaving it for a few days, though, caused it to lose charge, so be prepared to keep it charged all the time or put it on the charger before you plan to play. You can’t use it at all while it’s charging, so keep that in mind, too.

As a reminder, I received the Lava 3 in 1 in exchange for an honest review.