And she said yes!

Since that first excerpt, she’s shared a second, and I really, really, really need to read this book, y’all! Check it out and see if you agree… 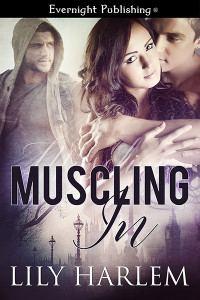 My husband has a secret. Desires he’s kept locked away in a deep, dark place.

Determined to pry details of this forbidden longing, I had no idea how much this new side of him would turn me on. So when I met the object of his lust I couldn’t let it rest.

Edward Moorland was a force to be reckoned with, a man who fought for his country and what he wanted. But did he want me and my husband? Would I ever experience his passion let loose or would I remain on the sidelines, watching, waiting, hoping?

One thing I knew, I wasn’t the type of girl to give in without a fight. I wanted to be part of the action too. More than part of it, I wanted to be in the goddamn middle of it with bells, whistles and fireworks when it all exploded. Yes…I wanted it all.

Excerpt from Muscling In

I led him into the lounge and we sat side by side on the sofa. He was perched on the edge, his body tense.

I took his hand, spread out his fingers and pressed a kiss to the center of his palm. “Coben, please, we’ve always been honest with each other about everything.”

“I know.” A small tendon flexed in his cheek beneath his blond stubble.

“And I know there’s more than meets the eye to you and Ed.”

“And it’s not a problem.” Again I kissed his hand, then rested it against my cheek. “I love you. I have from day one. You’ve got me, big time. Nothing is going to change that.”

“I’m glad to hear it.” His mouth twitched into a smile.

“And you told me way back that you’d flirted with being bi, that you’d had feelings for another man before. I’m hardly shocked to my core. I knew this about you before we married.”

He nodded, shoved his hand through his hair and rested back on the sofa. Some of the tension seemed to seep from his body into the cushions.

“Bi,” he repeated. “I suppose everything has to have a label these days.”

“Not for me. I just want you to know it’s not an issue in my world.”

“I know it isn’t. Really I do.” He stroked my cheek, then down my arm, took my hand in his and clasped it.

“So are you going to tell me about Ed?”

“Because…well, it was a long time ago.”

“It was about two minutes ago.” I raised my eyebrows. “And hey, the guy is seriously hot. Who the hell wouldn’t fancy the pants off him?”

“He is.” Coben chuckled, though it was a bit strained. “But let’s just say the military are not quite as understanding as you are, Sian.”

“But you’re not in the military, not now.”

He went deathly serious again. “No but he is, and he’s high ranking. Society might have moved on but the Air Force, certainly some sections of it, aren’t so free spirited.”

“Well, I’ve known him to have his fair share of fun with ladies so…”

I shook my head. I was getting ahead of myself, again. “He’s bi?”

I shrugged. “So tell me more.”

“I think he’s only ever had feelings for me.”

“I think I’m the only bloke he’s ever, you know, kissed, but of course that might be different now. I didn’t ask.”

I leaned forward and set my lips on his—lips that had kissed Ed! I wished I could have seen them kiss. Just the thought made me tingle between my legs. “So this kiss, was it when you were both serving?”

He swallowed. “Yes, but it was hard. We had to keep it a secret that we were into each other.” He reached out and cupped my cheeks. His brow creased into a frown. “And you must too, Sian. It’s not fair on him if anything gets out about his sexuality. That would be his choice not ours.”

“Of course I wouldn’t say anything. Why would I and who to?”

“But don’t you get it?” I shifted and straddled him, my knees bent against his thighs and my pussy, pressing through my knickers, over the creases in his denims and onto his cock. “The thought of you and Ed together turns me on.” I sank a little lower onto him. “I’ve told you that before. I can’t explain it, but the thought of you, and another man, him…”

He ran his hands up my thighs, bunching my skirt. He watched it ruck around his wrists and appeared lost in his thoughts.

“Tell me,” I said quietly. “What else did you do other than kiss? What else had to be kept secret?”

Oh God, will he give me details?

He shook his head slightly.

“Tell me.” I ran my hands beneath his t-shirt and slipped them over his pecs, leaned forward and kissed him. “Did he suck your cock? Did he suck it the way I do?”

I sank a little lower on him and was rewarded with a hardening. “He did, didn’t he? Suck you, that is.”

“Yes,” he whispered onto my lips.

That surprised me. How many ways were there to suck a cock? “Explain.” I pulled at his t-shirt.

He slipped it over his head, threw it to one side.

“Just different.” He reached for my top, tugged it off and dropped it next to his.

He licked his lips and looked at my breasts. “I dunno, it’s just more…rough with a man, more raw.”

“You mean you didn’t worry about his gag?” I could see it now. Ed on his knees, Coben, my husband, ramming his cock in and out of that gorgeous mouth, ecstasy all over his face—Coben loved being sucked off.

“Fucking hell,” I murmured, capturing his mouth in a kiss and pushing my tongue against his. I wanted him. My body was buzzing for his. He was hard now and I writhed against him as I fumbled with the button on his jeans.

“And you sucked him?” I asked, my lips moving against his.

“Sian.” He shoved at his jeans, pushed at his boxers and his cock jutted upward.

He pulled the gusset of my knickers aside and lined his cock with my entrance.

I sank down. “Ah, yeah…tell me…tell me everything.” I gasped. He was stretching me so much, this position, it felt wonderful for that first entry.

“Yes, I sucked him. We were…lovers,” he said, pushing up my bra so he could cup my breasts.

“Yes, like we are. Ed and I were together…we did…everything.” He pulled me to him and shoved his tongue into my mouth.

Get Your Copy of Muscling In

That was hot, right?!?! Well, then maybe you need to get a copy for yourself…