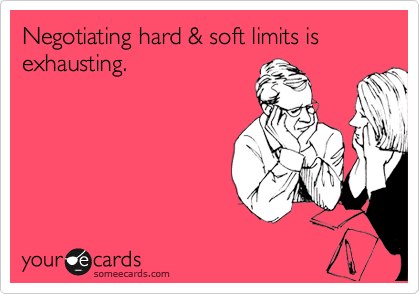 Okay, so at some point, you decided you’re kinky. Yay, you! (Welcome to the clubhouse if you’re new! Ha!)

Have you thought about what your limits are?

Do not say, “I don’t have any limits.” Everyone has limits. Some are just much narrower and more specific than others. (No, I won’t dance naked, covered in Jello, while you pour cat’s blood over my head. See? Bet that’s a limit for you now, huh?)

In general, there are two kinds of limits – hard and soft. (Stop laughing! I know what it sounds like.)

Soft limits are those things that make you unsure or a little nervous, but you’d be willing to try at least once.

Hard limits are the things you’re never, ever, for-never-ever going to do. No way, no how, uh-uh.

Be shocked, soft and hard limits differ from person to person.

For me? My hard limits fall along the lines of what many people might consider “typical”: scat (that’s poop, y’all), golden showers (yep, pee), blood, needles, cutting (which sometimes goes with blood, but not always) – basically anything that might involve some body fluids or physical harm to my skin that makes scars, draws blood, or hurts beyond a strike or blow).

The list of my soft limits is too big to name because I’m the type who’ll try almost anything once, and there are a lot of kinky things I still don’t know about.

So how do you know if something is a hard limit? It’s a gut reaction thing. If you hear about it or see it, and your immediate reaction is disgust, there’s a good chance it’s going to be a hard limit.

Want another shocker? Your limits can and will change over time for any number of reasons.

That’s right. What you hate today, you might be willing to try tomorrow. What you tried yesterday is now so disgusting, you can’t believe you did it, and now it’s such a hard limit.

I used to hate the idea of gags, especially ball gags. Ball gags were a hard limit, all others were a soft limit. I was afraid of feeling like my airway was cut off (says the woman who likes it when John Brownstone wraps his hand around my throat. Go figure.) so I wouldn’t try it. Then I tried a bit-gag, and I loved it. I could still breathe but I had the affect of a gag: muffled noise, drool, lack of power over my own voice. It was delicious.

The more I was exposed to the idea of gags, the more willing I became to try a ball gag, at least once. We reached a compromise. Instead of the solid ball, we bought the kind with holes that allow air to pass through. Guess what, gags are no longer a limit at all, and I’m willing to try the solid ball gag – as long as it’s not too big.

That’s just one example of a limit changing.

Limits change over time, especially as you become more experienced in kink. You might simply expose yourself to more information, especially other people’s experiences with a kink, until you become curious enough to try it. Or you begin to trust your partner more and more so that you’re willing to try new things with them. Or, and this is speculation, you find a different partner who brings out other aspects of who you are as a sexual being.

The thing to remember is that although limits are fluid, they should always be respected. Just because your limits might change later doesn’t mean they should be violated by anyone. If you say hair pulling isn’t allowed, then damn it, no one better pull your damn hair. You hate, hate, hate the idea of being hit with a cane? They better keep it away from you.

What I encourage you to do, especially if you find a partner who loves things you hate (or think you hate), is at least be willing to consider them. No, don’t run off willy-nilly and do something that makes you uncomfortable to make someone happy. Don’t.

Explore the idea. If after a bit of education and a lot of communication, it’s still a no-go, that’s cool. But sometimes we call something a “hard limit” simply because we don’t know a lot about it and what we do know freaks us out.

Be willing to explore and learn with your partner, and you never know what you might be willing to try next. The sky’s the limit – so to speak.