I am chugging right along – similar to an old engine trying to puff up a mountain – and slowly but surely I’m getting Madame Gretchen ready for release. I still need to do some editing and send it to my wonderful and amazing betas. After that, we’re gonna have a new book, people! Woohoo!

I keep saying it, but in case you hadn’t heard. If you’re a subscriber to this site, you’ll get a free copy when it’s released!

Okay, so the cover is finally ready. Carey from Safari Heat Books Tours and Author Services makes beautiful covers. I found several in her pre-made catalog that fit with different book ideas that I have.

I went with simple this time (thanks to Carey). I found, as I was writing, that while the story shows some growth of the different characters, the central figure is Madame Gretchen. 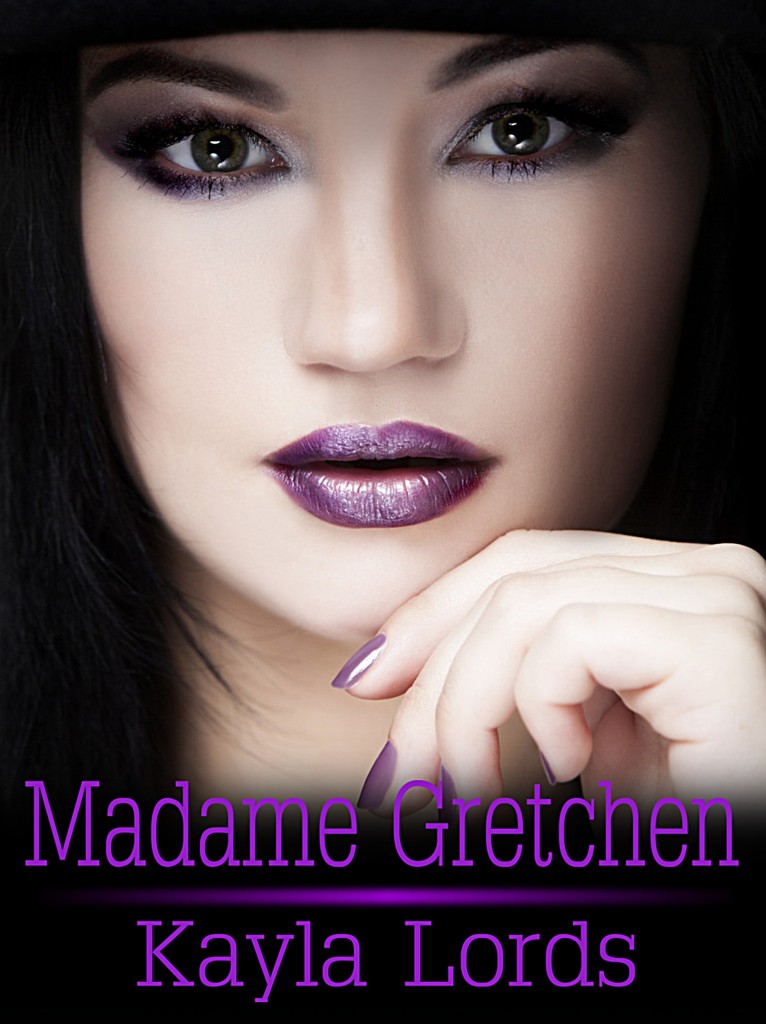 Okay, so some things never change. You know it’s a Kayla Lords book when you see purple. Here she is…my Madame Gretchen.

Now, cover reveals are nice and everything, but you want more, right? How about another excerpt, this time from the hottie of the book, Drake? Anything for you!

“Yeah, baby, I’ll see you tomorrow night…Tonight? Naw, honey, I’ve got a meeting with some clients that are in town for the week…Mm-hmmm, yep…again. Baby, baby, baby, I’m not runnin’ a game on you. I promise, in two weeks, my schedule will free up again. Really.” Drake checked his watch and saw the time. “Look, baby, I gotta go. If I don’t get to that meeting, I could lose the client which means less money to take you out. Okay, baby. Talk to you later.”

Drake ended the call in hurry, feeling only a little guilty for the white lie. He couldn’t tell his girl he was going to a kink club to have his ass handed to him by a skinny little Domme who looked down her nose at him. This girl was vanilla through and through. If her mouth didn’t do amazing things to his body, he’d have walked weeks ago. For now, though, he was willing to leave it alone – at least until he got into The Iron Maiden and could find a truly submissive woman. Mmmmm, his cock grew hard at the thought of a willing beauty kneeling at his feet.

Based on everything he’d read and the past few weeks of class, he was definitely a Dominant. He preferred control. He wanted things his way. He liked taking what he wanted, receiving pure pleasure. Sure, he’d heard that it was more than that, but that’s the part he liked so he wasn’t going to worry about the rest. He wasn’t looking to settle down anyway. Some spankings, some fuckings, and damn, he needed to learn more about bondage and fast. That’s all he needed.

He thought of a woman, kneeling at his feet, naked, tits forward, eyes down, smelling of sex and desire. Wet and willing, that’s what I want. If he didn’t let himself grow attached, he’d never have to worry about the responsibility bullshit.

Shit, he’d better get a move on if he wanted to get to class on time – for once. No wait, last week, Bella had been the late one. Wonder if she’ll be back? Last week had been intense. Madame Gretchen dismissed class with none of her usual flare, allowing everyone to leave quietly. The big dude standing over Bella when they left had intimidated Drake – not that he’d admit it to anyone else. His curiosity over what was happening had almost lead him to ask questions, but he didn’t do personal. He liked Bella, even though her self esteem was a definite problem. She was cute, curvy, and definitely fuckable. Hopefully the big dude sees that about her, too. She deserves a decent guy.

He thought about Mami and Big Daddy. Their vibe had been cool. Ivory mentioned to Randy Boy last week that Mami was pregnant and wasn’t willing to take a chance that the classes would get too extreme. Ivory was sure they’d be back next year. He hoped so. He’d love a chance to watch two switches go at it the club once they were all members.

The thought of Ivory made him smile. She was old enough to be his mom, but he liked her smile. She wasn’t his usual type, but if he’d been into older women, he would have made an exception for her. His fingers always sank into her fleshy curves whenever he had the opportunity to play with her in class. He liked it. He wasn’t sure about Randy Boy. That guy was the weird, quiet type. Looks like a damn hippy if you ask me. Probably a tree-hugger. And why the hell would any man want to be submissive?Pulling into the parking lot, Drake wondered what the night had in store. He hoped he’d have a woman kneeling at his feet soon.

He walked into the classroom and looked around. Tables, chairs, pen, and paper. Well this looks boring as hell. He couldn’t believe Madame Gretchen would take it down a notch just as things were getting good. Probably ran out of ideas. She didn’t seem like the creative type to Drake.

“Well, well, well, Sir Drake has finally arrived.” The sarcasm dripped from her voice, making Drake feel like a bug beneath her shoe. He hated that she always seemed to use that tone with him. With a mock curtsy, she continued. “So glad you could grace us with your presence, Sir.”

Drake decided to play it cool. “No problem, little girl.” He smirked and hoped he came across like he didn’t care. “But I bet you can go lower than that.”

Madame Gretchen’s smirk vanished. Her eyes glittered with anger. Aw shit, now I’ve pissed her off. “You may be surprised at just how low I can go, boy. Take a seat. I’m ready to begin.”

Drake winked at Ivory who’d watched the entire scene with a small grin on her face. She shook her head at him. “You’re such a bad boy, Drake. You better watch it. That woman is gon’ make you pay for that.”

“Yes, Miss Ivory, she probably will. But that’s half the fun of it.”

He turned his attention to the front and stared at Madame Gretchen, taking her in, willing her to pay attention to him again. Black leather pants, shiny black boots that zipped up her thigh, and a black tank top. She looks like she’s about to go to war. All she’s missing is a gun and a knife. For all his internal jokes, he had to admit, she was gorgeous. Her hair was in a long ponytail, better than the buns she’d been sporting before. High cheekbones, olive skin that was probably as soft as silk. He even liked her funky purple lipstick. For a split second, he wondered what it might be like to submit to a woman like her.

Well, what do you think?? For the record, John Brownstone walked away from reading the full story needing to adjust himself, so I think I did something right. Ha!