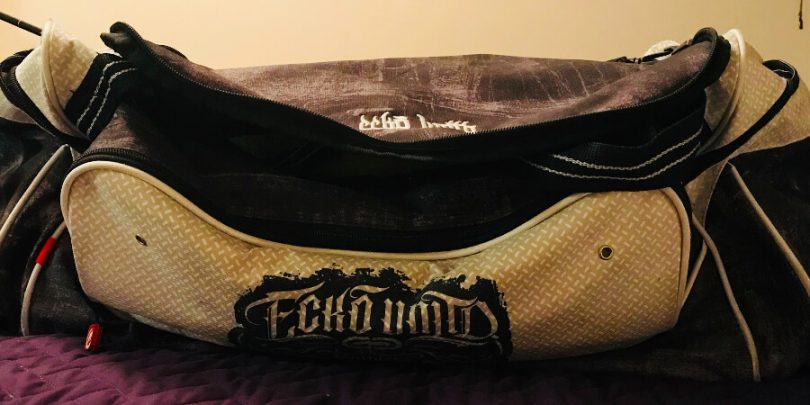 The toy bag looks innocent enough. Really, there are two toy bags. Both are deceptively innocent.

One is blue with the name of a New York high school and its mascot printed on the outside.

John Brownstone puts his rope in it.

“You can’t store your kinky fuckery in there?!”

I sound like I’m clutching pearls, offended, worried about “the children.”

He seems confused. I would be too if I was on the receiving end of my weirdness.

“Because your niece gave you that bag!” I breathlessly gasp. “It’s got a high school mascot on it!”

I sound like an old biddy who needs a good fucking and orgasm. Instead, he smirks and packs more rope into it. That’s why he’s in charge.

The other bag is different though. An old duffle bag he’s had for years. I know every nook and cranny. Every secret pocket.

It’s the club bag. Where most of (but not all) the weapons of ass destruction live. The floggers are rolled up neatly in a towel. The paddles tucked to the side.

And don’t forget the Wartenberg wheel, still stored in the padded envelope it was mailed in…back in 2013. Then there’s the crop, a wooden spoon, and my cuffs and collars. It’s all there. The physical proof of our sadism and masochism, tucked into an innocent looking bag.

The blue bag holding the rope feels more like his bag. He’s the lover of rope, while I love having his hands on me while he binds me.

But the duffle bag feels more like mine. Maybe it’s because it holds my favorite floggers. Maybe because I know most of the toys in it are bonded to me. We are willing to share so much with others but not that.

Truly, though, I think it’s mine because it’s my responsibility. Yes, he makes sure it’s packed correctly before we leave the house, but that’s only a small part of the equation.

At the club, wherever we play away from home, it’s my job to manage the bag.

I put it away in the storage area, and I take it to the play space.

I get on my knees to lay out each and every item, never quite sure what he’ll choose but knowing he wants every option available.

Are there toys that aren’t my favorite? Floggers that burn instead of kiss? The cane that makes me its bitch from the first strike? Of course.

I put them out, too. He trusts me to do it, knowing he’ll only give me what I can handle, even if I hate it a little. To purposely set something aside would be a betrayal of trust. Instead I trust him to take care of me.

Laying out the toys is an intimacy all by itself, even though I do it alone, with no witnesses. It’s my pre-scene ritual. I pray to feel my favorites during the scene and know I’ll feel his. Thankfully some are one and the same.

At the end of the scene, I can’t put away our toys. My brain and body no longer function properly. John Brownstone puts it all back together, including me.

But if I did my job right in laying it all out, he can pack it up again with his eyes closed. Because it’s my bag of toys, my bag of kinky fuckery, and one of the greatest gifts he’s given to me over the years.

Welcome to Wicked Wednesday. I nearly didn’t make it, but John Brownstone says, “Almost doesn’t count except in horseshoes and hand grenades,” so there you go. The prompt this week featured suitcases. A toy bag is like a suitcase…sort of.