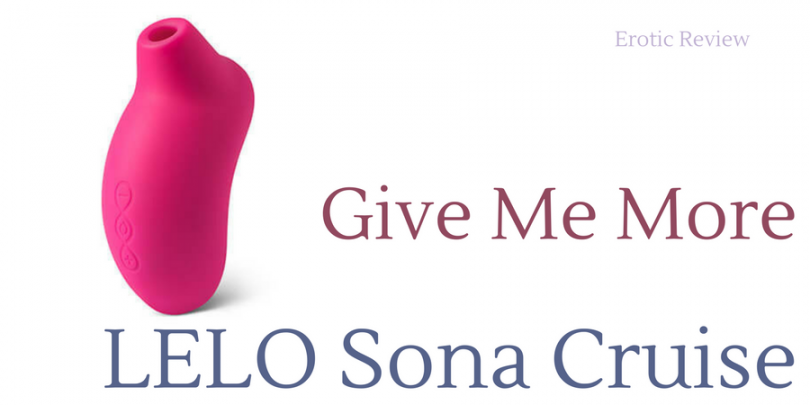 I don’t demand sex. Attention? Yes. Butt rubs? All the time. Fucking? I leave that to John Brownstone.

But here I was, rubbing my ass against his pelvis, whining.

“I ache, Daddy. Please fuck me. Please? I need your cock!”

While it was a shock to me, I don’t think he was all that surprised. He’d just watched me play with the LELO SONA™ Cruise  a Sonic Clitoral Massager (received in exchange for an honest review). He bore witness to what I’d just done to myself.

His last comment before finally giving me exactly what I begged for was, “I can fucking smell your cunt.”

I bet he could.

Let’s start at the beginning…

It began innocently enough. Come towel down on my side of the bed. The pink sex toy (that looks slightly like other brands) fully charged. After previous experiences, I didn’t know what to expect. I hoped what I’d read from other reviews and the information I received applied to me – that this wouldn’t be like what I’d experienced before.

The LELO SONA Cruise isn’t a set it and forget it clitoral massager. There’s no placing it against your clit and waiting for the pleasure. After playing with the settings, finding the right angle, and practicing – yes, practicing – I finally found the right spot.

Pleasure built from the bottoms of my feet and streaked like lightning up my thighs to the center of my body. The first orgasm ripped through me. I clenched my teeth to hold back the scream. Before I could move the SONA away, another one struck.

The sensations overwhelmed my body and brain. I gasped for breath. The sound of the sonic waves thrummed in the background.

Oh, yeah. I’d forgotten to do that…as well as the man in bed watching me with fascination.

More, goddamnit. I fucking want more. These were my favorite kind of orgasms. The ones that build – slowly or quickly – but they begin as a single drop and crescendo into a tsunami, threatening to drown a willing victim in pure pleasure.

A little more fumbling, finding the best angle and the best setting. Pushing buttons. Like a fiend who needs a fix, I couldn’t give up. More. Give me more!

I found the angle. The spot. The moment. Here it came again. A slow wall of pleasure, rising up from the bottom, sending my body into quaking need. When the orgasmic wave crashed, I forgot to hold back my cries. I clutched the sheet in one hand and forced the other to hold the toy in place. Another orgasm. Then another.

“Aaaahhhhh!” Too much. It was finally too much.

I spent a few moments catching my breath. And then…Again.

Like a lost voyager at sea, I drifted from setting to setting, angle to angle. I couldn’t find the sweet spot. In different circumstances, frustration would have compelled me to give up. But the pay-off would be too good if I could…just…find…YES THERE IT IS!

My whole body jerked as if electrified. Every muscle stiffened, then convulsed, as if my entire being gulped for air. The orgasm crashed as a fiery wave. I didn’t know where pleasure and pain parted or joined. Even when I finally threw the SONA to the side, declaring, “No more!” aftershocks racked my body, sending me into orgasmic convulsions.

I managed to set the toy to the side and slide the now soaked towel out from under me. Thankfully, the layers had held. No wet spot to sleep in. Thinking I was done, I rolled over, ready to analyze my experience to my now captive and aroused audience.

Twenty minutes later, I realized the ache between my thighs wasn’t dissipating. While I had no desire for more orgasms – at least for a while – I did need something else. Which is how I found myself both begging and demanding to be fucked. As usual, he gave me more than I bargained for but eventually he fucked the ache away and replaced it with mind and body numbing exhaustion. 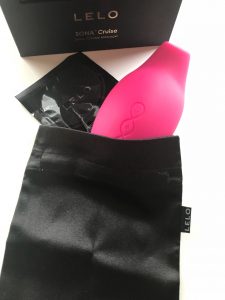 This is my first LELO product to review, and it’s a brand new item which is exciting. When I was offered the chance, I jumped on it, but then I saw the design. Oh. I’ve tried these before – or so I thought. While the design looks like others (who shall not be named), the function is completely different. There’s no sucking, air flow, or vibrations. The LELO SONA Cruise uses sonic waves and pulses, y’all. No. Really.

I wasn’t sure how to review the SONA at first because this isn’t a toy you set against your general clitoral area to sit back to enjoy the ride. This one takes a little work. You can’t press it too close to your body or the sonic waves don’t feel the same – they seem to slow down and it gets louder as it comes in contact with your body. At the wrong angle, even on the lowest setting, it’s too intense. At another wrong angle, you don’t feel anything. But when you find the right position? Fucking magic.

What I believe about the LELO SONA Cruise is this…

Want to Try it For Yourself? 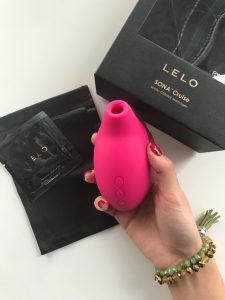 The LELO SONA Cruise is normally $179, but at the LELO website, as of the date of publication, it’s only $99. If you’re the type of person who enjoys and gets off on clitoral stimulation, this is definitely one to consider. And while it’s a lower price, now may be the time to get it. If you really enjoyed other styles that look similar (although with very different functions), this one might do it for you, too.

For the record – and I haven’t said this in a while – the LELO SONA Cruise is going in the nightstand and I will learn how to use it more effectively.