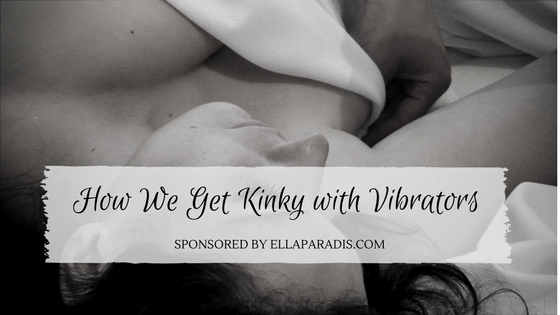 Vibrators don’t make an appearance in every sexual moment of ours, but when they do, it invariably ends up being at least a little kinky. Frankly, when I try sex toys out by myself, it’s lacking something because I want to know how they feel when John Brownstone pushes it against my clit. I want to know how many orgasms he can wring from my body.

Being the sadist, he doesn’t stop just because I squeak a little. On my own, I’ll pull away the moment it becomes too intense. Not him. That’s his signal to take it a step further and find out just how much I really can take. So yes, if you’re new to the idea of sex toys with your partner as a general thing, vibrators can definitely be kinky as hell.

I cry out. I writhe. I beg. And I come over and over again. It’s enough to exhaust me and wring my body dry. Which, of course, is part of the point. The rest is about control, power, and pain – three of my favorite things.

Using More Than One

One of my favorite moments of kinky fun with vibrators was during a week we destroyed a cheap hotel room. Well, not the whole room. Just the bed. And the covers. Probably the mattress too. If you ever visit our area, I can tell you which hotel/room to avoid.

Bondage and the Magic Wand

I get tied up. He makes me feel small and helpless. And then the best, biggest, and wettest orgasms of my life happen. There aren’t enough towels for this one. What kills me is that I always end up begging for it to stop only to think to myself later, “I could have taken more. I’m sure of it.” (No I couldn’t.)

When we were long distance, John Brownstone would often send me a text:

I’m a firm believer that anything can be made kinky with a little bit of imagination. I also don’t think it’s a competition for who can be the kinkiest. So if having your partner hold the vibrator and decide where and how much sensation you’ll feel makes you feel a little dirty and kinky, go for it. And if you look at my experiences and think it sounds pretty vanilla, cool. Kink is a spectrum, and what matters is the enjoyment you find in it with your partner. If you haven’t tried getting kinky with your sex toys, I highly recommend it.