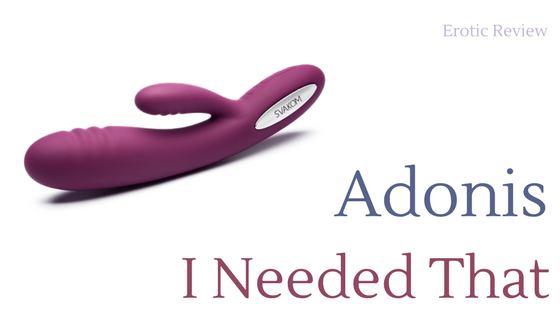 We didn’t go out (I don’t like crowds and sometimes can’t handle them). Instead, I did John Brownstone’s taxes. Oh, don’t be impressed. Turbo Tax makes it ridiculously easy.

By the time we went to bed, I was tired, cranky, and just wanted to have my butt rubbed. Poor man, he tried to get me interested in more. In our dynamic, I’m always sexually “available” to him (barring serious issues) but that doesn’t mean I’m always into it.

“Daddy, if you want to fuck, it might be easier to pull out the lube and just do it. I’m really not feeling it tonight.”

The slightest sadistic touch had me cringing and whining. Any sexual stimulation triggered a resistance from me.

He sighed and pulled away. “No, nevermind. Another night.”

Guilt washed over me. I always hate it when he’s denied something he wants, but every cell in my body resisted his advances.

He kindly rubbed my back and my butt while I sort of let the thoughts pour out. I wasn’t feeling submissive. I wasn’t even feeling like a babygirl (no matter how I might behave). We hadn’t fucked in two weeks. I hadn’t orgasmed in at least that amount of time. Eventually, we both fell into a restless sleep.

Podcast recorded – without him, again. Ugh.

Thinking Valentine’s night was going to be a night for kinky fuckery, I’d charged up our newest toy – the Adonis by Svakom (received in exchange for an honest review). It was ready to go.

Apparently, so was I.

I shed my clothes in quick order. Placed the towel across the bed – because you never know. And started playing with the buttons.

I’m not the type who can just ram a toy into my pussy (not sure too many people can). She’s got to be coaxed and cajoled. I rubbed the length of the toy against my slit. My toes curled and my hips lifted. The vibrations are meant to be felt from the other side, but it was still good. A shuddery spasm passed through my body.

Turning the toy around, I pressed the g-spot stimulator against my lips. Easy passage. I pushed until my body swallowed it up. I moved the clitoral stimulator into position.

Hissing and gasping at the sensations, I lowered the vibrations. Yes, me. Lowered them. Doooooown. Too much too soon, but damn it was good.

I played with the buttons. Turned on the heating element. Switched up the sensations.

Orgasms rolled through my body. First little shimmery ones. Then bigger, muscle-clenching climaxes. Over and over again. I choked back screams. I squeezed my eyes shut. I clamped my thighs together. Big mistake or brilliant move, depending on how you feel about intense sensations and semi-forced orgasms.

Deep inside, my g-spot was waking up, throbbing and pulsing. I pushed the toy in and out, until…

My legs fell back on the bed. Was I done? Almost. One more. Something big, something wet. I pulled the toy out of my body and flipped it over again, so the length could rest against my slit. I set the widest part against my clit.

Oh God, the warmth had kicked in. It was luxurious. It was intense. It was delicious!

A second later, AAAA-IIIEEEEEEE! Warm fluid gushed out of my body. For good measure, I kept the toy in place until another followed. I arched my back, chest pushing forward, thighs trembling, eyes shut, biting back a scream.

As I came back down to Earth, I smiled. That was exactly what I needed.

About Adonis by Svakom 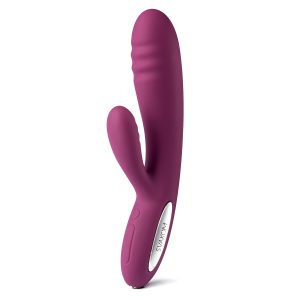 My g-spot is hard to stimulate and usually needs pretty heavy stimulation. On the highest settings – of which there are 36 potential variations – it did exactly what I needed to do. But those higher settings became too much for my clit once I’d had a few orgasms. The buttons were all within easy reach so changing things up wasn’t difficult at all.

Do I recommend this one? Absolutely! It’s still not as beloved as the Keri or (of course) my Hitachi, but it doesn’t have to be.

Want one? Get your Adonis here.