Well, it only took two, three, oh let’s not dwell on how many years it’s taken me to do this, but finally, finally, just when people probably thought I’d decided to stop writing fiction, the next Sir and Babygirl – the final installment is nearly ready for release!

Today, though, I’ve got a cover and an excerpt! 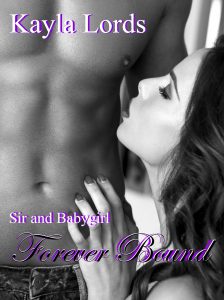 “That’s right. Mine, and right now, I’m going to claim what’s mine.”

Her knees give way as her body trembled. Wrapping one hand in her hair, he pulled her head back and covered her mouth with his. It was a brutal kiss. He ground her lips against her teeth, forcing her mouth wide, hurting her. He didn’t care. He would have all of her.

His grip in her hair tightened as he dragged his tongue over her parted lips, down her chin and across her neck. Babygirl whimpered as her hips began to move against his.

He nipped her earlobe before sinking his teeth into her neck. She screamed and writhed against him. This game wasn’t new for either of them. He wasn’t letting go until she answered, no matter how out of her mind she’d been driven with lust and pain.

“You! Oh God, I want you, Sir!” She wailed the words, breaking off with a sob.

He thanked whatever deity might exist that she’d changed out of her good clothes at some point. She was now clad in one of his old t-shirts and little else. He released her, grabbed the neck of the shirt with both hands and ripped the flimsy cloth from her body.

She was naked underneath. Smooth, soft, and bare for him. His cock pushed against his pants, desperate for release.

When Babygirl tried to cover her body, he growled a warning. He prowled around her, leaning forward to inhale her scent. Goosebumps covered her skin. Dusky pink nipples tightened in front of him. His mouth watered.

He stepped closer and trailed one finger across each nipple and down over her stomach. Her muscles twitched. He crowded her, letting her feel his heat and his power. Her eyes were wide and glossy. She was enthralled, already letting go of the day’s worries. Perfect. He was going to drive every negative thought out of both their minds. It would be beautiful and brutal.

Babygirl shrieked as he pulled her across the room by her hair. He’d given her no indication of his intentions. For a moment, she almost resisted until he felt her give in and follow, knowing she was coming with him one way or another. He pressed her head down against the arm of the soft, exposing her round bottom. He kicked her feet, forcing her to spread her legs as wide as possible for him. He wanted nothing hidden from him.

He smoothed his palms over her skin. She melted against the couch. When he raked his nails across her back, hard enough to leave red, angry welts, her body hummed and vibrated. Anticipation? Need? Fear? He wasn’t sure he cared what it was.

And that’s in the first few pages! Getting excited? I know I am! If you haven’t read the series yet, get the other books to catch up: Book 1 ♥ Book 2 ♥ Book 3

My kinky patrons get to read my books before they’re published (and edited, lol) for as little as $1 a month on Patreon. You can always join me there, too!

At the risk of killing my own book sales, I’ll let you in on a little secret – once Forever Bound is published, I’ll compile the entire series into a boxed set with extra chapters not previously published in the series, too. Look out for that, too!