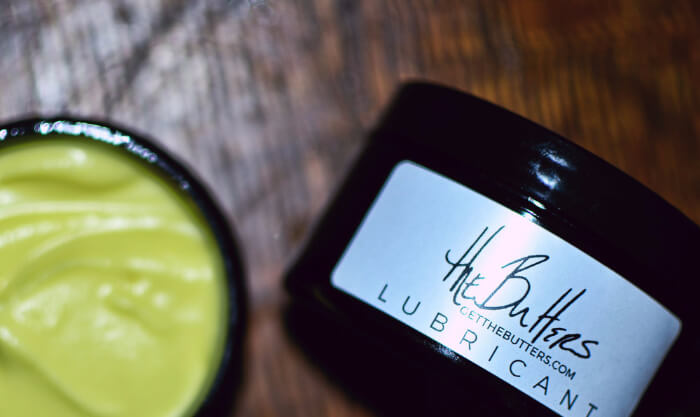 He’d bent me sideways, frontways, backways (that’s not really a word), and all the ways he could bend me in the name of pleasure.

Pinched nipples. Smacked ass. Tweaked, flicked, stroked, and rubbed clit. My pussy had been fingered. My hair had been pulled.

I was primed, ready for another dozen orgasms or a long nap, whatever he wanted.

What he wanted was to fuck me senseless.

On an early Sunday morning, sex position acrobatics are at a minimum. This is the time for the easy fuck, no matter how sadistic and pleasurable the foreplay is. Sunday morning fucks can be rough, but the position is a familiar one.

Ass to pelvis, legs bent, pussy filled. We lay on our side and move together, as one.

No matter how ready I feel, sometimes my body disagrees. That’s why we keep lube on the nightstand. This time we had a new one to try: The Butters by LTASEX (received in exchange for an honest review). It didn’t look like any lube I’d ever seen. In that moment, it didn’t matter. I only needed it to do it’s job – get John Brownstone’s hard cock deep inside of me. Now.

The cool air on my back meant he was lubing himself up. He was back in a second. There was no cold, slimy feeling. Maybe he changed his mind?

“Oh my fucking God!” he growled as he slid into me, quick and easy. I’d never heard him sound so satisfied, and I know my cunt feels good to him. This was different.

Like a madman, he began to thrust in and out, pinning me down, his grasp tight and painful. It was delicious!

Gone was our easy Sunday morning lovemaking. It was replaced by a frantic fuck, complete with animalistic growls and skin slapping against skin. I cried out as his grip became a punishing hold. He called me “slut” and “fucktoy” as he arched his back for one final thrust, coming long and hard.

About The Butters: Lube

I’m not shy about my appreciation for lube. Plenty of women feel like there’s something wrong when their body doesn’t get as juicy as they might like during sex. And sure, it could be a medical condition, but most of the time, it’s our body being it’s weird self. Instead of freaking out, we keep lube nearby. A less-than-lubed pussy isn’t standing in the way of my kinky fuckery (uh, or his either).

Because it’s got so many uses, I was skeptical that it could be a good standalone lube. Well, hell, was I wrong. Personally, I didn’t notice anything at first except for the lack of the typical cold, gooey feeling you can get with lube. But John Brownstone noticed. That “Oh my fucking God” was the most satisfied I’ve heard him sound in a long time. He slid right in and had more (and better) sensations than he usually does with lube.

That would be enough for me to like The Butters, but wait, there’s more. I always clean myself up after sex – both of us actually. I don’t like cold come on my skin, and I always need to pee. Always. After we fuck with lube, it’s always extra messy down there (ugh). Guess what? Not with The Butters. It’s not drippy or gooey at all which isn’t a selling point to me, but it’s definitely a bonus.

To see the ingredients, get a price, or order your own jar, click ===> The Butters: Lube