Y’all know the drill. Read about the book and the excerpt (she shared a hawt one just for us!) and if it gets you steamed up, click one of those handy-dandy purchase links at the bottom and get yourself a copy!

From Teresa: I had so much fun writing Bad Kitty. The heroine and one of the two heroes are both felinoids—aliens who have catlike features and cats’ cheerful amorality. Sex is pretty much an “anything goes as long as everyone has fun” proposition for felinoids. Love is another question. It seems that’s tricky no matter what species you come from.

And then there’s Cal, the human lawman they seduce while he’s disguised as an interplanetary playboy criminal. He keeps telling himself he’s going along to further his case, but he knows he’s lying to himself just as much as he’s lying to his new lovers. He’s in over his head and it could cost him his head. On the other hand, he’s never had so much freewheeling fun… 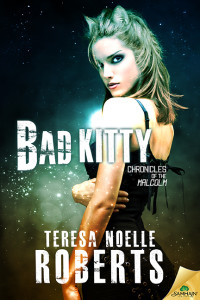 When you make the Devil’s bargain, be prepared to take the heat. A lot of heat.

Most of cat-girl Xia’s early memories are repressed, thank the Great Cat Mother. But her body remembers how to kill.

The longer she and her fellow Malcolm crewmates are holed up on lawless Cibari hiding from assassins, the twitchier she gets—until the planet’s insanely sexy warlord, Rahal Mizyar, borrows her skills to take out slavers.

Rahal suspects Xia is his mate, but the human-raised female never learned the finer points of felinoid rituals. The solution: make her fall hard and fast for him, even if it means playing dirty.

Hired to determine if Xia is the long-missing granddaughter of the felinoid prime minister, Cal Janssen has finally tracked her down. Getting past Rahal, though, is a problem—until he’s mistaken for a notorious arms dealer and playboy. And he finds himself the object of both Rahal’s and Xia’s seduction.

When their first mission brings Xia’s memories bulleting back to the surface, she realizes she’s fallen for two men who don’t exist. Running away, however, could be her deadliest mistake.

Warning: Contains an assassin with a swiss cheese memory, a badass warlord who’s getting tired of his own con, and a freelance lawman. Secrets, lies, and hot sex with no rules.

About the Chronicles of the Malcolm series

In the 26th century, humans and numerous alien races share the galaxy. Technology has advanced massively. Old Earth is a vast preserve and museum, and humans have spread to the stars. But some things remain the same. Love, lust, and money motivate both humans and other sentient species. Politics can get ugly. And crime can pay very well indeed.

Meet the crew of the independent freighter Malcolm. They usually succeed in keeping things only a little bit illegal. But then a seemingly legit job goes supernova—and they’re on the run, hiding from assassins, a planetary government, and their own dark pasts.

It’s the perfect time to fall in love!

All too soon, Rahal pulled back from the kiss and moved his hand from Cal’s aching cock to Cal’s cheek. “Look at me, Viking. I bet those blue eyes go all stormy the more excited you get. I want to see that.”

Rahal began to stroke his cock again, the same lazy, delicious rhythm as he thrust into Xia.

Xia made a sad little noise as if she knew she was about to be cheated and Cal bit his lip hard in an effort to pull back from the brink.

Rahal finished one last long, luxurious caress, then shoved gently at Cal’s chest. “Your come has a prior engagement. Otherwise I’d stroke you until you blasted where my cock and Xia’s cunt meet.”

“Of course you do.” She still sounded chirpy, even though her body quaked from Rahal’s thrusts, faster and harder now, lifting her off the cushions with their intensity.

Then she took him in. Her eyes rolled back into her head as if she was overwhelmed by pleasure. He wanted to do the same but for a few seconds he forced himself to keep his eyes open so he could watch his cock plunge into that hot, eager mouth, watch the movements of her hands that were maybe half the size of Rahal’s, but, oh stars, just as skilled in their own way.

“Yum,” she sputtered, his cock halfway into her mouth, one hand on his balls, the other circling his shaft. “Even better than I imagined.” At least that was what he knew she must have said. It was all a cock-muffled blur and at that point Cal couldn’t think of anything he’d rather hear, except the chorus of cries and moans they’d all produce when they came.

At this moment, Cal would testify that nothing in the cosmos—not the Horseshoe Nebula, not the ten-kilometer-high Falls of Laskar, not the Sea of Miltas under the light of four full moons—was more beautiful than Xia’s lovely mouth stretched and distorted as she sucked his dick. Nothing more beautiful than Xia’s body joining with Rahal’s. He wanted to keep watching, keep seeing the lush, crazy-lovely spectacle. That talented, slightly raspy tongue and the occasional hint of those sharp fangs created sensations unlike anything he’d experienced before. He’d enjoyed plenty of blow jobs in his life, and they’d all been good—face it, even awkward oral sex from an inexperienced lover had its merits—but this was remarkable.

A climax was roaring in too fast, and all the visual stimulation wasn’t helping. He had a feeling that Rahal could hold out for a long, long time if it suited his purposes—like making Xia lose her mind with pleasure—and Cal didn’t want to look like a chump in comparison. He closed his eyes.

The darkness only made the wet, raspy-velvet suction more intense. It accented Xia’s strangled noises of excitement, Rahal’s muttered curses that came out buffeted and softened by a purr, the sounds of the felinoids’ bodies slapping together and Xia’s mouth working on his cock.

He had to…he had to…

He tried to dredge up the schematic of his shuttle, but his mind was a blank except for pleasure.

He racked his unresponsive brain. Stellar navigation tables, conjugations of Kethrani irregular verbs…there had to be some distraction that would help him last a little longer. Just when he’d settled on trying to remember the names of all the uninhabited planets in the Sigma Nu system, Xia circled his anus with her finger. A delicate touch without penetration, but that was all it took to blast him off.

Xia continued to work on his cock, obviously savoring every drop. Or maybe it was just a teasing cat-girl thing because, sensitized as he was, her tongue was almost too intense on his head.

Almost…but he certainly didn’t pull away.

He opened his eyes just in time to see Rahal reach between his body and Xia’s to find her clit. “Now, kitten,” he growled through tightly clenched teeth. “Now!” The last now was a roar as Rahal came.

Xia, releasing Cal from her mouth but not her hand, arched her body off the floor in a voluptuous arch and let out a surprisingly small groan as she, too, reached her peak.

Cal was collapsed on the pillows, still riding a postorgasmic high, when Rahal’s deep voice cut through the haze in his brain. “So, Viking, I still want that meeting. Xia and I need about half an hour to clean up, then you and I should talk. And not just about weapons. You seem like the perfect person to help me with a new project.”

“Right now, I’m not inclined to say no to anything you two ask of me,” Cal managed to say with a lazy, satisfied smile that wasn’t entirely faked, even if on the inside he was thinking, Oh marl. He’d been prepared to bullshit about weapons until red dwarf stars burned out. Even call in a few favors and have some delivered, if necessary. He just hoped he could bullshit convincingly about whatever he was now being called on to do.

Teresa Noelle Roberts started writing stories in kindergarten and she hasn’t stopped yet. A prolific author of short erotica, she’s also a published poet and fantasy writer—but hot paranormals and BDSM-spiced contemporaries were her favorites until she realized science-fiction romances offered new possibilities for outrageous adventure, wild sex and love that overcomes serious obstacles, including being from different species! Find her at www.teresanoelleroberts.com, on Facebook at https://www.facebook.com/AuthorTeresaNoelleRoberts, or on Twitter, where she hangs out as @TeresNoeRoberts.