It’s not everyday someone reaches out for a shameless promotion, but I love being asked and I love doing them! (I have another one next week, too!)

This week’s promotion is for Flying High: Sexy Stories from the Mile High Club, an anthology edited by Rachel Kramer Bussel with a forward by Alison Tyler, and published by Cleis Press. There will be a review coming at a future date, too. 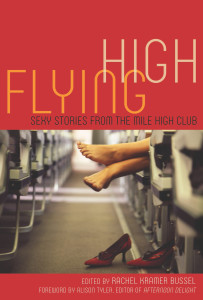 The Mile High Club is, for many, the stuff of legend, but I’m here to tell you that where there’s a will, there’s a way. Flying can bring out so many of our insecurities, fears, and frustrations, that it’s natural we’d want to find a way to relieve all that tension by getting it on. Indeed, several of the stories here deal with sex as a way to conquer a fear of flying.

In these stories, characters are often surprised to find themselves engaging in such risqué behavior midflight. The surprise and naughtiness make what’s happening even hotter. For others, it’s been carefully orchestrated, such as the woman meeting her online pen pal in “34B” or the one putting her arsenal of sex toys to good use in “Obedient.”

Other scenarios are more fanciful, and, unless you’re really lucky, are probably not going to happen to you. Part of the thrill of even thinking about the mile high club is that in such close quarters, someone’s bound to notice the movements, noises, and sensations of sex happening near him or her. Voyeurism and exhibitionism are part and parcel of sex on a plane, even if you never officially get caught.

While this isn’t a how-to manual, I’m sure you can pick up a few tips on the fine art of blanket placement and in-flight discretion from these talented writers. Alas, during the numerous flights I’ve taken in the last year, nothing so risqué has happened to me, but that hasn’t stopped me from fantasizing about what might be going on a few rows over, or wondering, as I stand in the security line, who might try to pick me up. I love that Wi-Fi is the wave of the flying future, as I write about in my story “Urgent Message,” and I’m looking forward to much in-the-air flirting.

Whether you’re a member of the Mile High Club or just want to be, I hope these stories take you on some exciting trips, and that your next plane ride is just as eventful! Please feel free to share your story or keep up with what’s new in plane sex at my blog at http://flyinghighbook.tumblr.com/.

I was getting wet thinking of Henry the flight attendant. So much so that I forgot I was sitting next to Drew. As Henry walked up and down the cabin, his thigh lightly grazed my arm.

We were taking off soon and Drew, in his usual gregarious manner, started to make conversation with Henry. I was annoyed. This was my piece. Drew asked him if the color of his eyes was real. I rolled mine.

“It’s real,” he replied, showing no sign that he’d taken offense at Drew’s tacky question. I could tell the color of his eyes was genuine because I had been staring, and colored contact lenses have a decidedly fake look to them, especially in person. Henry the flight attendant looked back and forth between me and Drew. “So you’re headed to Chicago,” he said. “You live there?”

Henry looked amused. “So you two are a couple?”

It wasn’t an “Oh, how cute, you two are adorable together” kind of aww. It was an “I feel badly for you. Come, let me show you what a real man is like” kind of aww.

I looked over at Drew. I would have sucked my teeth out loud if I hadn’t caught myself. Later, Henry came walking down the cabin with his beverage cart. “And what can I get for you, miss?” he cooed.

When he handed me the cup, his fingers accidentally brushed mine. Now he was certainly flirting with me. This had to stop because it was only aggravating my condition. I gulped down my soda, hoping that the cool rush would help to curb the tingling between my legs. It didn’t. We were in the first row so I could see Henry in his quarters. He was eating. He must have felt me staring at him because he looked up from his plate, put down his utensils and leaned back in his chair, eyes on me the entire time. He smiled a disarming smile and held my gaze until my eyes traveled lower and stopped on his lips just as he was bringing the lower one between his teeth. The smile widened. It was a look that said plainly, “We both know I could make you feel more pleasure than he ever could.” My breath caught. I glanced over at Drew, who was in his own world, happily listening to his iPod.

I decided I needed to go to the bathroom, with the intention of getting myself off. Maybe after the release I could sleep and maybe I’d stop salivating every time I looked at Henry. I hurried to the back of the plane. The bathroom was occupied. Shit, I thought. It was only a few minutes, however, until the passenger came out. I went in and closed the door behind me. I undid my fly and slid my jeans down around my ankles. I dipped a finger into my pussy. I was soaking wet. I brought my finger to my nose and inhaled. I was intoxicated by the scent. I licked my finger and then circled it around my clit, letting out what I hoped was a barely audible moan. My hand was Henry’s hand and he stroked my clit up and down, back and forth and in tiny circles, making my breath quicken and my nipples stand erect. I reached into my shirt and pulled out one breast, bringing the darkened bud of the nipple to my lips. I stuck my tongue out and flicked at it. My tongue was Henry’s tongue, warm, hungry. I kept working at my clit with my other hand and I was shuddering, seconds away from orgasm, when there came a knock on the door.

It was Henry’s voice.

Ready to get your copy? Buy it on Amazon!