Ok, so normally, Shameless Promotion is on Thursday and Boobday is on Friday. Well, this week is a bit off because of the opening of the new site. That, and I haven’t taken any good pictures of my boobs in forever, so, for this week, a shameless promotion is on a Friday. Trust me, though, I think this one is worth it. 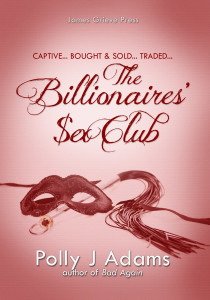 When Kate Vale decided to spend the summer as a waitress at parties for the super-rich, she knew she would be moving in circles she’d never encountered before. It turned out to be a world of depravity and pure unbridled lust she had never even dreamed could exist.

Later, when she signed up with the Billionaires’ Sex Club she thought she knew what was in store. Endless days fulfilling the sexual fantasies of the super-rich, a world of depravity, control and submission. What she didn’t realise was that she could be put up at auction, sold to the highest bidder, and when the you’re signed up to the Billionaires’ Sex Club, the stakes can get very high indeed.

But then… what happens when the stakes get even higher?

All three Billionaires’ Sex Club novelettes in one volume. Explicit stories of bondage, dubious consent, multiple partners and more from the bestselling author of Bad Again and Wings of Desire.

How had I ended up in this situation?

Standing with my arms stretched above my head, cuffed to iron loops set into that luxuriously padded wall, my legs forced apart by a spreader bar locked at each ankle. Naked. Exposed. Feeling incredibly vulnerable, and so frustratingly, achingly, turned on…

Until my time at the Club, I’d never known that there was this completely hidden side to me, that I could be so intensely turned on by such things.

They were gathered in a semi-circle, sitting in deep armchairs and studying me closely, as if I were a painting, or an exotic jewel.

The sheikh, sitting prim and slight in his tailored blue suit and white head scarf. I knew from experience that his dick was skinny and as long as a snake, hard as a poker when he was excited, and that he used it to stab like a fencer’s foil.

The slick businessman, black and wiry and incredibly strong, the kind of guy who had such mastery, such control, he could fuck you hard, like a piston, literally for hours, while all the time he talked to you in that honey-sweet Deep South drawl – that voice alone could charm you wet in seconds.

The software developer, who’d started a music-sharing business in his bedroom as a teenager and turned his first billion by the time he was twenty, his face familiar from countless magazine covers and celebrity websites.

The small Chinese guy who was said to own half of Hong Kong and who had assistants for everything, including having sex while he watched, while another of his assistants, a delicate young man with a wispy, boyish mustache, fastidiously jerked him off with a leather-gloved hand.

The Russian oil baron, with a square jaw and piercing blue eyes, model looks that he’d paid good money for; a man who liked to be tied to a wooden bench and beaten with a wooden paddle.

And him. Connor Stark. Owner of the Club, CEO of Connor Stark Industries, one of the few firms that could stand shoulder to shoulder with the likes of Amazon and Google. He’d only touched me once in a sexual way. He’d come into the room where I was chained to a wall. He’d paused, taking in the sight of my naked body, my challenging look. Finally, he’d spoken. “Ms Vale,” he had said. “Are you ready to begin?”

He’d traced a nail down my chin, my neck, and on down between my breasts, and with an intensity that was shocking, I was hot, desperate.

“What won’t you do?” he had whispered in my ear.

That finger again, running up my belly, across my ribs, up the swell of a breast, and then flicking at a nipple, pinching hard.

A shock of pleasure had stabbed through my body, then, so intense.

“You like to be fucked and used, don’t you, Ms Vale?” His words were so soft in my ear, barely even a whisper.

And then he had stepped away and given me to two of the Club’s guests.

He had sat there in a stiff-backed chair, and watched.

And now, here in the same room, where I was being displayed to prospective buyers, Connor Stark sat there in his deep armchair, idly swirling brandy in a big half-balloon glass.

The Billionaires’ Sex Club is available from:

Polly J Adams at Amazon (US) and Amazon (UK)

PJ Adams at Amazon (US) and Amazon (UK)