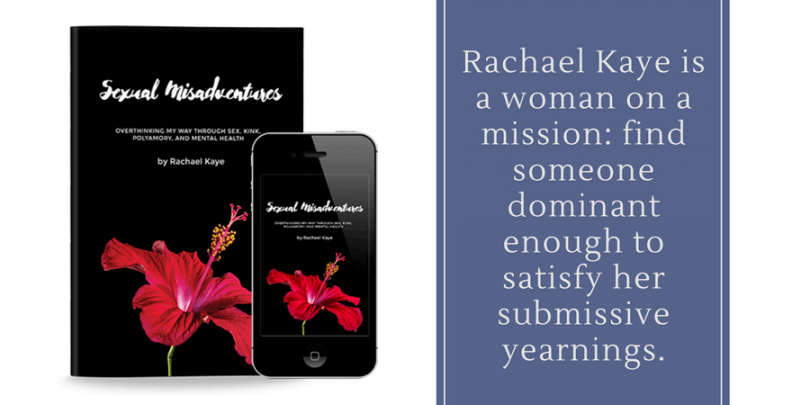 When one of your smutty writer, blogging, kinky friends publishes a book, there’s only one thing to do. Ask nicely to be allowed to pimp the hell out of them and their new book. So it goes with someone I know as Wriggly Kitty. You should get to know her as author Rachael Kaye.

Check out her first book, Sexual Misadventures: Overthinking My Way Through Sex, Kink, Polyamory and Mental Health, and if it’s got your attention, get a copy!

Rachael Kaye is a woman on a mission: find someone dominant enough to satisfy her submissive yearnings.

Eighteen months ago, she sought help for her own #MeToo story. In the process, she discovered a whole new side to her sexuality and came out to her husband as polyamorous. They’ve spent the past year on a sexual and emotional rollercoaster… their marriage almost didn’t make it and Rachael fell for the wrong man.

A self-described chronic overthinker, she started blogging as a way of expressing herself. And through a lot of soul-searching and self-reflection, found sides of herself she didn’t know existed.

A friend suggested I turn my blog into a book, and my first instinct was “no way.” My blog is where I go to work out where my head’s at; it’s raw and it’s me at my most vulnerable. The idea of it reaching a wider audience was terrifying. But then I realised my writing is out there anyway.

And I had to work out a pseudonym. If I thought people knew who I was, in real life, I wouldn’t be able to keep blogging like I do. There are some people who know, but I keep a tight rein on that… it’s the anonymity that allows me to be so honest. I’ve also been accepted for publication in two non-fiction books coming out later this year, so a pseudonym was also necessary for these… I didn’t want to appear as “Wriggly Kitty” in author listings.

Turning my blog into a book wasn’t quite as easy as I first thought, either. There were so many typos that needed correcting, and I’m sure I’ve missed so many more. I had to alter the language slightly, so in (e)book form, it made more sense… using “writing” rather than “post” for example. And there were some blog posts that just didn’t work in the book, and I didn’t want to include images, so that cut out a lot of possible content.

Whether I’ve been successful in producing the book, or whether people want to read it, is a different matter. But, as a project in its own right, it made me really think about my blog and my writing, and one thing is certain. I’m not stopping any time soon!

About Wriggly Kitty aka Rachael Kaye

Wriggly Kitty is a UK-based sex blogger. She describes herself as “kinky with vanilla sprinkles,” and documents her experiences in kink, poly, and her sexuality, as well as her mental health wobbles, and over-coming body insecurity, amongst other topics.