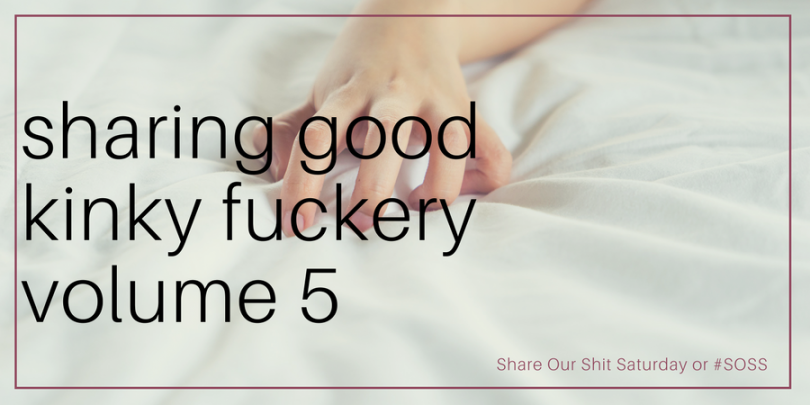 The bad thing about skipping Share Our Shit Saturday (aka #SOSS) for so long is that I have almost too many posts to choose from. The good thing is that there is so much good fucking smut out there! While I don’t know yet if I’ll participate every week, now that we’re in the new year, I’m definitely back.

In no particular order, drum roll please, here are just a handful of the dozens of sexy posts I’ve read in the past few weeks…

I always like getting into the minds of different people, to hear their thoughts and glimpse their feelings. Cousin Pons said it was “mostly” fictional, but I felt like I was in his mind as he masturbated. And it was delicious. One of the reasons I enjoy his writing is because every piece has a unique voice and style. You never know what it will be, but it’s always good.

More than Friends by Asrai Devin

Asrai Devin writes damn good kink. Full stop, no one can ever tell me different. Her series about two star-crossed kinky people, one of whom is a cam girl, has grabbed hold of me – I’m invested in the outcome. I’m rooting for their happy ending even though it’s not guaranteed. I adore their kinky sex and their inner thoughts. Start at the beginning of the series to get all the details but even individual chapters, like Morning One, are good on their own!

Intellectual Curiosity by The Zen Nudist

Everything I read by The Zen Nudist aka Kilted Wookie is good. Every. Thing. (Even the things he might say are rubbish.) Intellectual Curiosity, though, fascinated me because it was yet another glimpse into the mind of a man. What’s he curious about? What it would feel like to be a woman, especially during sex. Y’all it’s both fascinating and funny, thought-provoking and irreverent.

Ring My Bell by Mischa Eliot

Mischa almost didn’t publish the Ring My Bell story (the first part) but damn, I’m glad she did. (Really, just read everything she publishes – you won’t be disappointed.) At the time I’m writing this, there’s a second part already out, and I’m on the edge of my seat waiting for more. Escape rooms are all the rage right now in my part of Florida, and I have zero interest. But this kinky version that Mischa describes? Yeah, sign me up!

The Toy by Cimmerian Sentiment

I almost hate making lists because there are so many other people I could include, excellent writers who published things I loved. If I can stay on top of sharing, this won’t be a problem. But my words (two, not just one, because I’m an overachiever from hell) are “prioritize” and “balance” so while I want to share All The Smut, All The Time, I might not be able to. And I have to realize it’s okay. Hopefully, though, you find new bloggers to follow from these kinds of lists.