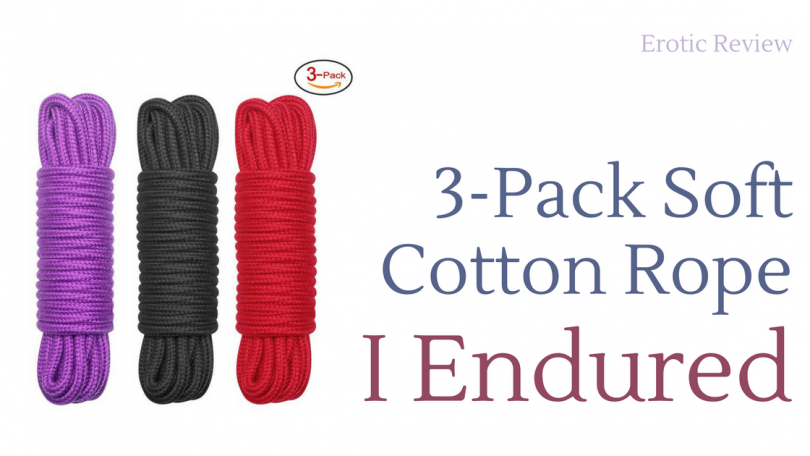 The swimmy, floaty feeling of endorphins and dopamine began while I watched him lay everything out. Two big floggers. The wooden paddle. The Hitachi.

Towels draped our coffee table. Pillows were thrown on the floor at one end.

What did he have planned?

“Go to the bedroom. Come back naked, girl.”

I saw the new rope (received in exchange for an honest review) sitting on the bed. We’d talked about using it on this unexpected kid-free night. But how did it fit in with whatever was happening in the living room?

And why the living room?!

“Not all playtime has to be in the bedroom, babygirl.”

No arguing with that logic.

I walked into the living room, shy in my nudity in this place usually so vanilla and family-oriented. The doors and blinds were closed. I checked.

John Brownstone stood next to me, solid and warm. I leaned in a little. We kissed, tongues softly touching. This was no duel. He already owned me. His hand wound through my hair, pulling me down. I bent forward, my head just below his chest. Silence between us. I didn’t know what he wanted, but I didn’t have to. He knew.

He led me, hand still in my hair to the table.

I was immediately grateful for the pillows. He pulled me over the top of the table.

“Get your legs closer.”

I understood this was to help him with something but I still wasn’t sure what.

My stomach and breasts pressed into the towel-covered table. It wasn’t the most comfortable position, but I thought I could endure it. He gently nudged my knees apart. My labia opened. The cool air flowing in the room was a jolt to my warmest, wettest places.

I suggested music, always my favorite addition to what was clearly the closest thing we’d had to a “scene” in probably a year. Godsmack filled the room. Oh yes, this is perfect.

He crouched down by one leg, and I saw the rope. Things began to make sense. I would be bound in position. Unable to move. Forced to endure. For a moment, I was unsure of myself. Could I stay in this position that was already a little uncomfortable? Could I find pleasure in it?

I shook my head to clear it of the self-doubting thoughts. What I’d craved most in the past few weeks was full and total submission. What better way to get it than to ignore this small discomfort for the promise of greater pleasure?

My head began to swim. My eyelids drooped. The act of deciding to submit to this…whatever this was…was enough to relax every muscle in my body. I was already boneless and all he’d done was secure one leg to the table.

He moved to the next. I tested my bonds. How far could I move? Could I re-position myself as needed? What I didn’t want was to cut short our time together because I couldn’t handle it.

Black rope on my right thigh. Purple rope on my left. I don’t know what specific ties they were. Only that they worked.

When he came around to the front of the table with the red rope, a dawning realization swept through my mind. He was binding me, hand and foot, in place. The rope was wound around my wrists. I watched in silent fascination as he worked it around and through a loop, around again and through another, back and forth, until he tied the ends to the other legs of the table.

I was caught. A very willing rabbit in a snare. My body trembled with anticipation, quaking and quavering before he’d touched me.

He stood back, taking pictures and admiring his handiwork. And then…he began while I endured. 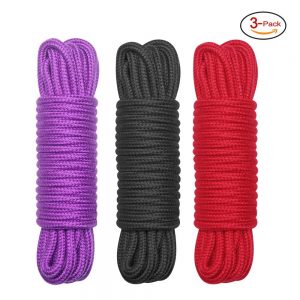 Here’s what I know about rope: It should hold a tie/knot. It shouldn’t be scratchy or uncomfortable. It should be long enough to do something with. The 3-Pack Soft Twisted Cotton Rope from Bontime did the trick. Each piece of rope was 32 feet (10 meters) long. It was soft and very comfortable and (my favorite), it left marks on my skin for a while after it was removed.

John Brownstone was impressed that the ends were “whipped” which means they’re tied off with string on the end so the rope doesn’t fray over time. He, the bondage lover, said this was an excellent rope for beginners to use and try. He managed to use all three with no problem in a single evening of kinky fuckery which was fun.

Check out this 3-Pack Soft Twisted Cotton Rope and use code MFKLD42W to save!