For the record, when I say “hack” I’m not referring to a bad cough or your computer. Hacks are tips or tricks designed to make something (the thing you’re hacking) easier, better, and/or faster. There are hacks for everything these days:

Marketing, working from home, building a business, decorating your house, hell I wouldn’t be surprised if there were “hacks” for raising your kids.

So why shouldn’t we have hacks for better sex? Well, that’s the premise behind a new book out by Kinkly: Sex Hacks: 100 Tricks, Shortcuts, and Secrets to Set Your Sex Life on Fire. Sex bloggers from all over contributed, including little old me.

(Scroll down to enter the giveaway for a paperback copy – open to U.S. readers only) 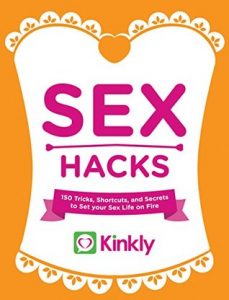 I’m going to share just a little bit from one of my own hacks (both of mine were about orgasms – of course!).

This is the unedited version, and the actual hack may read a little different in the published/finished book.

Edging is being brought to the brink of a climax and then stopping the impending orgasm in its tracks just before you go over the cliff. For many bottoms or submissives, stopping the orgasm when you’re on the brink can feel impossible. I’m edged quite often in my relationship, and I’ve been told I must have such will-power and self-control. Not at all. I just figured out a trick that works!

Want the whole hack? You know what to do.

If you want to grab the book and start hacking your way to better sex, you can get it on Amazon:

Or you could just win a copy!

I’ve had a copy to give away in my hot little hands (or at least in my house) since the very beginning of March, and I’m finally able to do something about it.

Check out the Rafflecopter giveaway below. Comments, shares, or visits on Facebook or Twitter will get you entered in to win.