I can’t tell a short story to save my life. There are always plenty of details that make it more interesting or give the listener or reader clarity. Sometimes what you think you know about a story changes once you have background information or know the thoughts going through someone’s head.

I guess that’s part of why I enjoy writing so much. When I tell my story, I can share those details. When I write fiction, I can give the reader a peek into the characters’ minds.

For this week’s Wicked Wednesday prompt, I’m going to take what could be a short story and give you the details. 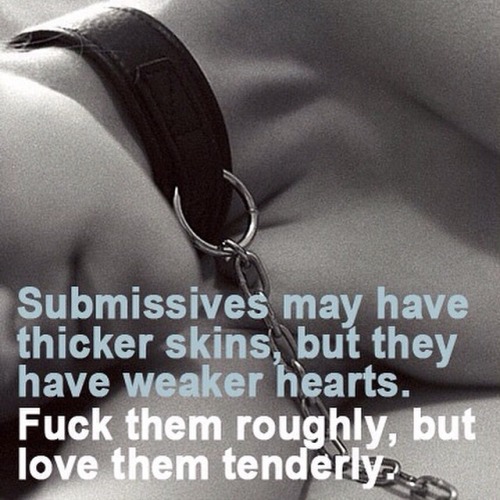 Weaker? No, but mine is tender. Image via BDSMlr

So you’ve got the gist, right? Here’s what actually happened, though.

In mid-November, after weeks of thinking, talking, and hearing about our dwindling savings, the Christmas presents we needed to buy, the week long trip to visit family, and every other financial stress all of us have at the end of the year, I decided to do something about it. “Doing something” meant taking on a big writing gig that wouldn’t pay a lot per piece, but would make up for that lack in sheer volume.

Typical wannabe bad-ass that I am, I let them pour on the assignments. I told myself this was how we were going to get ahead. I told myself it was temporary. I even told myself a certain Daddy Dom would feel like he had more freedom to find a new job or focus on his new woodworking project if I could just bring in more money.

Except I forgot I’m not really Wonder Woman.

The rest of my work still needed to be done. Children still needed to eat. Laundry simply won’t do itself. I won’t admit how infrequently I’ve cleaned the house over the past couple of months.

I decided that I could do all of that, take on the work, wrap all the Christmas presents, help the kids make their home-made gifts for everyone (why did this have to be the year they decided to get crafty?!), help Daddy market his new Etsy shop, keep up with my workouts and healthy eating, do all the things for the man and boys, and still be the (ha! Ok, I almost choked on that one), and still be my babygirl self.

Doesn’t sound different from most other women out there, right? Except, we don’t live like most other people, and I don’t have the “typical” life (thank God). I’m in a 24/7 D/s relationship, and my first priority is to my Dominant and the things he asks of me.

Somewhere along the way I forgot that, and in an effort to do what I thought was right, I started to lose myself.

I cried at the drop of a hat.

I barely slept at night. A few hours at most, and even then, I tossed and turned the whole time.

I was called out as a brat more than once. To me, brattiness is about intention, and I swear to you, I never intended bad behavior or snarkiness.

I couldn’t joke, find the humor, get silly, or relax about anything.

I woke up, wrote and worked, threw food at my children from time to time, and found myself at odds with Daddy. A lot.

We weren’t connected like we usually are. Of course, some of that was the natural course of two busy lives, like when he was sick for a week.

In the midst of all of this, I somehow managed to get even busier (my own fault because I said yes to almost every assignment I was given), and I started taking shortcuts. Oh, not on my work, don’t be crazy. But shortcuts in my life were fair game.

One of my tasks is to walk outside twice a day for 15 minutes. To avoid the time it takes to get my shoes on and pull back my hair – and get my music, and then come back inside and do it in reverse to get back to work, I started walking inside, pacing back and forth like a caged animal.

I didn’t mention it to Daddy until the second day. He sighed, said that wasn’t what he meant, rolled his eyes, and we moved on. Instead of asking for clarification (because I was terrified he was going to make me do it the normal way, and I swear to you, I didn’t feel like I had one spare moment to waste), I assumed that he understood it wasn’t an ideal situation, but that I was still within the spirit of the task.

Two days later, when I mentioned it again, he exploded. He told me I was purposely disobeying him. He said I’d asked for his help in being healthier, but now I wasn’t accepting his help or doing the things I said I would do.

I immediately went on the defensive. I tried to explain how every minute of my day was spoken for, that I was already working until 9pm each night (after starting at 6:30 in the morning) and that I still couldn’t get it all done. I justified my actions by telling him at least I was moving and walking, that in my mind I was keeping with the spirit of what he wanted me to do.

The conversation ended in harsh words and tears – tears I had no time for.

We calmed down and spoke later.

Oh, and did I mention that in the middle of this, my mother called me to tell me the results of a test she’d had done? It wasn’t awful news, but it wasn’t great either. I thought I’d handled it well, but later that evening, I broke down. Ugly tears and no appetite.

Basically, I was a hot mess in a pressure cooker of stress that I’d created for myself.

I reverted back to an old me, one without a Dominant partner, one who didn’t behave submissively and used anger and sarcasm as a defense mechanism. Instead of bringing the problems and issues to Daddy (because I thought I knew what he would tell me, and I didn’t want to hear those answers), I kept everything to myself, and did what I assumed he’d want.

And I was wrong.

That final fight over walking inside or outside (which sounds like an insane thing to fight about unless you’re in the middle of it) wasn’t the real problem – although it was a separate issue to be dealt with. That moment was the culmination of a long, slow build up of emotional gunk that had to be dealt with, and fast.

The next day, before we would go to the dungeon and get our kink on, we discussed what had happened. No kids, a nice dinner, walking arm and arm with hot coffees. It was nice to talk it out, but it still wasn’t resolved.

I begged him to understand that nothing I’d done had been willful. Yes, I screwed up, but the intentions had been right. I truly believe that. Thinking he saw me as someone who would purposefully disobey him and disregard rules hurt as much as the harsh, angry words from the day before.

When we arrived at the club, I was subdued. Mentally exhausted from the conversation, physically exhausted because I’d worked two weeks non-stop already with three more days to go. I knew we needed what was coming. We needed this night for so many reasons.

When he began, we weren’t connected. I was determined to take everything he gave, partly to relieve the stress, of course. But also because pain is a fire that cleanses. It wipes everything away so that all you’re left with is pure sensation. That kind of pain is raw and it’s real, and you can’t hide from it, no matter what you do. It was exactly what I needed.

Somewhere in the middle, I don’t know when or why, maybe the song was the exact one we needed, or he looked at me in the perfect way, or his flogger or paddle or cane landed in the right spot, but at some point, we began to move as one together.

Just like that, we were connected again. When he came back around me, and began to flog, paddle, and cane my body, it was no longer a battle. It was a gift that we were both giving and receiving. The entire energy was different. We were us again.

But there was still emotional gunk to deal with.

Later, when he had me down, wrapped in a blanket, and sitting quietly, a few things happened.

I savored the softness of my blanket, a hot pink Hello Kitty fleece perfect for a babygirl who’s toes are always cold.

And then I realized that soft feeling on my skin was the first time in weeks I’d felt like a babygirl. In an instant images flashed through my mind of all the babygirl things I loved that I hadn’t done in weeks. As soon as I had the realization, another epiphany followed.

I had been a brat to him. All those times I called myself sassy or snarky, I’d been a sarcastic brat instead. I was instantly ashamed of myself, hating what this stress had done to me, to us.

I began to bawl. Big sobs wracked my entire body. The music was so loud, and he had no idea what was happening until he turned around to check on me. I don’t think I’ve ever seen him move so fast.

I sobbed and hiccuped. I tried to speak and couldn’t. When I managed to tell him what was wrong, I cried harder than before.

We held each other, and I soaked his shirt with my tears. When we finally pulled apart, the energy between was even better than before. My mind was truly calm, peaceful, and very quiet for the first time in so long. We were connected again, stronger than before.

Was the longer version better than the short one? Gosh, I hope so. But you see how much you miss with “just the facts, ma’am?” Yeah, I’ll keep telling my long, winding stories.