Let’s see…vampires…erotica…yes please! Help me welcome Maya DeLeina to our kinky corner of the world for the release of her new book Fire and Ice, Seasons of the Vampire 1 and show her some kinky love, y’all! 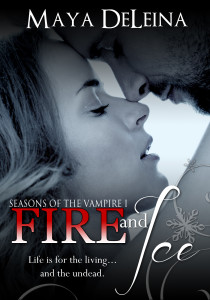 Noel Tierney thought she’d have enough time before the predicted storm to make it to her holiday retreat, but the snow hit sooner than expected. Caught unprepared on a treacherous pass, poor visibility and icy conditions lead to a crash. She lay immobile in her vehicle, stranded in a ditch in the most remote leg of her journey.

A faceless hero comes to her rescue and Noel has no choice but to wait out the blizzard in her rescuer’s unique cabin nestled in the woods. Everything about Grayson James peaks her curiosity—his valor, air of mystery and most of all, undeniable attractiveness.

For three days and nights, passions are unleashed and unexpected emotions are brought to life. When the storm breaks, Grayson vanishes into thin air, but not before revealing startling news that leaves her questioning her sanity.

Fast forward years later and Noel is in the southernmost part of the United States. She’d come seeking solace after her husband’s tragic death, but what finds her in Key West is more than she ever anticipated.

In the sultry summer, her unbridled winter’s ecstasy resurrects.

And so does the Vampire.

“You don’t know me, Noel. I may look like something you’re used to, but on the inside, I-I am not a man—”

She lifted her head and sensually kissed his chin, breaking him in mid-sentence. “I know you can’t offer me anything past this. I get it. But you are a man and I want you.” She tilted her crotch upwards and spread her legs wider, giving him more access to her pussy that was wet and ready. She circled her hips slowly, rubbing her moist and swollen lips against his long, hard shaft.

“You don’t understand,” he whispered with an ache of torment in his voice. He buried his face into her neck. “You just don’t get it.”  He sucked on her flesh right where her neck met her shoulder.

“Oh!” Her eyes rolled back in her head. She shut her eyes tight, concentrating on the sensation he stirred in her body.

Most women say it’s their nipples, but for her, the most sensitive part on her body lie at the crook of her neck. A treasure-trove full of pleasure nerves, her neck proved her undoing. If a man kissed her at the right spot, with the correct amount of pressure, she could be sent over the edge. And with his performance, Grayson delivered her right to the gates of heaven.
“I can come with you just worshiping my neck,” she whispered seductively in his ear.

He continued devouring her flesh. He caught her muscle in his teeth and bit down.

“Jesus!” she yelped in surprise.

A burst of iciness shot through her muscles. The burn traveled all through her shoulders, down to her fingers. Another trail went into action, extending up past her neck and wrapping around her skull like a glove.

The cold turned to heat, soothing her down to her bones. All the tension she held in her neck and shoulders since the accident faded.

And then that unmistakable feeling rolled in.

She hadn’t a clue what he was doing or why he obsessed with kissing her neck.

She simply said a silent thank you for whatever magic spell he performed on her.

He remained planted at her neck while his hand positioned his cock at her opening. She continued riding the waves of pleasure when he entered her. He released her neck and focused his eyes on her body. Hunger burned in his stare.

He huffed and wrapped his hands around her waist. He kneeled back and tilted her pelvis up as he thrust into her.

She gasped at the angle of his entry.

He speared her with his luscious cock over and over again, slow in his rhythm, but steady and deep in his penetration. He fit snuggly inside of her, stretching her just to a point that transformed the woman inside of her to an animal. “Yes, do everything to me. I’m all yours.”

Born and raised on the Hawaiian island of Oahu, Maya could be seen at her favorite beach, Lanikai, performing with an all-girl band where she played keyboards, guitar and provided vocals, working as editor in her high school’s yearbook and volunteering her time at a humane society through UH of Manoa civic groups.

In 2006, Maya relocated to Colorado. Her crystal blue oceans, waterfalls and eighty-degree year-round weather were traded for four season weather, enchanting forests and majestic mountains, which led to her rekindled love for vampires.

In winter of 2010, she penned her first manuscript and by 2011, Flesh Fantasy was under contract and released by Siren Publishing. To date, Maya’s titles includes Flesh Fantasy, Veil of Seduction, Blood of Luna, and Dark Companion, with Fire and Ice and Crimson Snow being added to her bookshelf by the end of 2014.

In mid 2014, she banded with other Colorado romance authors to form the group, Mile High Muses, in which Maya serves as “The Vamp”. Catch her Forbidden Fruit Friday blog and guests she hosts on Sultry Saturdays.

Not only does Maya have theatrical book trailers that bring her sexy vampires to life, Maya and her vampires were featured in Singer/Songwriter Jill Cohn’s music video “Blessing Moon“.