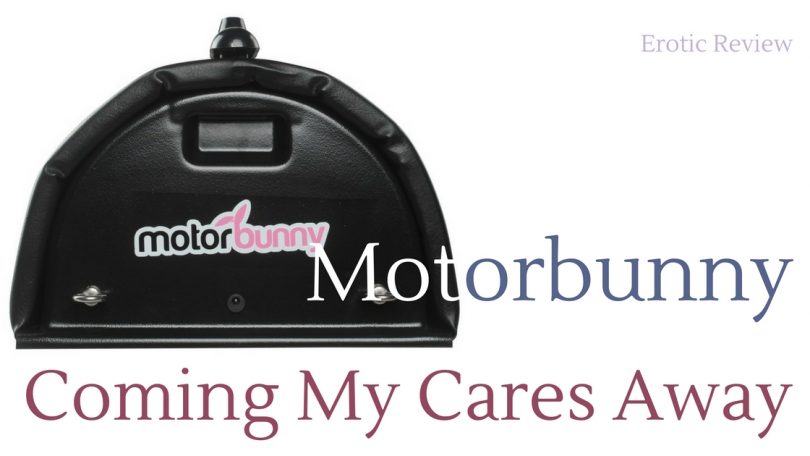 I sat on the couch, the phone pressed to my ear, thinking, “I’m not hearing this. This can’t be real. What do I do?”

My mother was detailing the most recent bad behavior from my oldest kid, who’s staying with his grandparents for part of the summer. It was overwhelming, out of character, and the kind of thing that makes you wonder if you’ve totally fucked up as a parent. At the same time I was pissed off. My kid knows better. What the fuck is he thinking?

By the time the phone call ended, I was near tears. Stress, anxiety, and a sense of dread about what this all might mean. What I was not thinking about was the Motorbunny (received in exchange for an honest review) set up in the bedroom, waiting for me to debauch it and myself.

My head was beginning a familiar dull throb that usually quickens into a pounding headache. My throat felt tight, squeezed shut by anxiety. I wanted to eat or sleep. Orgasm? Not so much.

John Brownstone wasn’t quite sure how to help. I think he settled on leaving me alone because he headed into the bedroom. Alone (with my thoughts) was the last thing I wanted. I followed him.

“Hey! Are you playing without me?!” He stood by the bed, naked.

“I thought….” We both knew what he thought. I wasn’t in the mood, and he really wanted to test this baby out.

“Well say something next time!” I wasn’t exactly at my most submissive. Seeing him naked and ready to play made me want to play, too. (Okay, I was jealous.) “Maybe an orgasm or two will help, even though I’m definitely not in the mood.”

Orgasm or two? If I’d only known, I’d have hopped on that thing and yelled, “Ride ’em, cowgirl!”

He’d set it up for me earlier. The clitoral stimulation attachment was on, with the riser that helps you get more contact between clit and Motorbunny. Lube was ready, if I wanted it. The switch (with two dials) waited on the “Bunnyrest” – a platform for hands, elbows, or to raise the device further off the ground or surface.

I kicked off my pants but left my shirt on. I crouched down over the toy, feeling a little awkward, but the earlier anxiety was loosening its grip. This might actually be fun! (Which was, of course, the whole point.)

Two controls – buzz and twirl. The twirl was for penetrative attachments. I ignored it. Buzz is my favorite word, and it could go from zero to 11. Even better!

I leaned forward, arms on the rest, and let John Brownstone turn it on. A healthy rumble filled the air around us. A simultaneous rumble sent tremors through my pelvis. I moved, shifted, adjusted. Sat up, sat down, and then —

“Hssssssssssssssssss!” That was the spot. I buried my face in his chest to muffle the sounds I wanted to make.

I glanced down. His cock was so close. I opened my mouth. He grabbed my hair. As I rocked back and forth on the machine, I sucked him down, slurping like the greedy girl I am. I squealed around him as the first real orgasm hit, searing liquid heat dribbling out of my body.

Nothing big and explosive, but rolling climaxes that make you wonder if it will ever stop. I had to let him go so I could breathe and squeal as quietly as possible.

Then I shifted again. It hit my clitoris at a new angle. We played with the dials.

“Too high! Too hiiiiiiiigh!” He hurried to turn it down.

I let myself get lost in orgasm after orgasm. Shivers went through my legs. Fluid flowed from my body. I rocked back and forth, back and forth.

“Enough!” In my head I shouted but I think it came out as a squeak.

I couldn’t take another one. But that didn’t mean I was done. On shaky legs, I watched him dry off the Motorbunny and change the attachment so I could fuck myself with it. Then we began again.

Same method as before. This time, though, I used the lube. I shifted and moved until I was comfortable. Now it was time to add “twirl” in with “buzz.” This made the penetrative attachment move and shift inside my body. We went up to 11 before I felt anything earth-shattering.

This time, a different position was needed. Laying down did almost nothing, but sitting up? Hello! Gently fucking myself, I had small, deep orgasms. The kind that would have clenched John Brownstone’s cock like a vice.

Eventually I was unable to form coherent thoughts or words. Time to be done.

My thighs quivered as I dismounted and stood up – with his help.

The negative feelings of earlier were gone. Oh, the situation still has to be handled, but my stress and anxiety went the way of all those hot fluids – washed away into nothing. 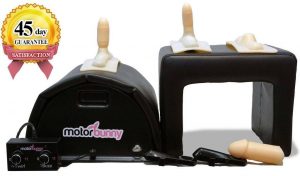 If you’re looking for a discreet, nothing-to-see-here sex toy, the Motorbunny might not be for you. However, if you ever want to ride your way through an orgasm, come a little closer and listen (read) carefully. If it reminds you of a Sybian, don’t worry, it’s not your imagination. They offer a comparison between the two on their website so you can see both the similarities and the differences. Since I’ve always wanted to try something like a Sybian, when Motorbunny offered to send me one, I jumped at the chance.

This is a big, behemoth of a toy priced at around $900 (as of the date of publication). That sounds like a lot (and it is) but it’s also a lower price than its competitor. From that perspective it’s a steal. They also offer coupons and sales from time to time as well as a payment plan and a 45 day money back guarantee (as of the date of publication). My point is that if this interests you, you may have options. Oh, and shipping is extremely discreet. I came home to a gigantic box and even I couldn’t tell what it was at first.

All that said, I was delightfully surprised by the Motorbunny. It’s customizable on so many levels. The dials to control the “buzz” or the “twirl” go up to 11 (which my nerdy heart loves). We received the starter pack with included three attachments to try. You can buy other attachments, too, so you have even more options.

What you feel (good or bad) changes depending on your position on the Motorbunny as well as where and how you position the toy itself. When I used it, we placed it flat on the floor with the rest in front of me so I could lean forward and support myself or sit up. You can also place the Motorbunny on top of the rest or in a chair if getting all the way down on the floor isn’t an option. Wherever you put it, make sure the surface is stable and can bear your weight.

John Brownstone tried it out too. I’m not sure yet if he’ll write his own review. If he does, I’ll come back and link to it. He wasn’t able to have as good a time as I did, but all of the ways he tried it showed just how versatile it was.

For kinky fuckery and forced orgasms, I can see this being a ton of fun. Dom holds controls, sub finds right position, and away you go. Even better, there are eyebolts attached to the base so you can secure ankles/wrists/legs in place. I have no doubt some devious, kinky plan is percolating through John Brownstone’s brain at this very moment.

This toy isn’t quiet, discreet, or going to fit in a nightstand. If you buy it, plan on finding a home for it or brazenly letting it sit out, whatever works. But for fucking yourself or enjoying kinky fuckery, this is definitely an option to consider. I have no doubt we’ll be playing with this during scenes or when we want to change things up a bit.