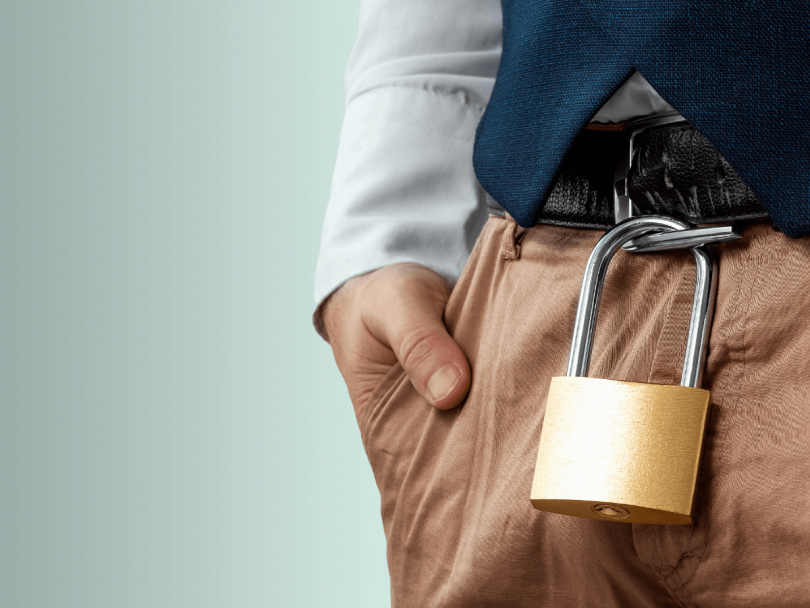 When I say “fascinate” I mean that my surface-level knowledge of them gives me pause, creates questions in my mind, and gives me a type of morbid curiosity and nervousness. I mindfuck myself with “unanswered” questions (that I could easily find answers to).

I can’t imagine ever trying chastity play, specifically locking up a penis. John Brownstone has zero desire to limit access to his cock, and he’s the one in charge around here. And I have zero desire to dominate anyone at all, let alone someone’s access to their penis. But also, thinking of people walking around with minimal access to their own penis fascinates me.

(Why just penises? Well, I have nearly zero libido, so the idea of locking up my own vulva seems moot. I’m barely paying attention to it now. I might not even notice if a chastity belt is on, as long as it didn’t chafe. And I don’t spend a lot of time thinking about other vulvas, so…penises it is!)

Before I learned about different cock cages that are made for long-term wear, all I could think about was chafing, the possibility of a lost key, and the need to pee without the ability to do so. It made me anxious on behalf of the caged people in my imagination. Weirdly, there’s a part of me (based on my previous ignorance of how good some cages can be and how some people may play with this kink) that was sort of impressed by the sheer will it would take to go through such imagined misery as a submissive.

And yes, I say this as a kinkster who invites my own kind of pain or temporary “hell” in the name of blissful submission.  But, not gonna lie, the “lost key” thing still gives me second-hand anxiety. Of course, there must be ways to deal with it, and I know there are cages that don’t use a lock and key system. But…still.

Technically, John Brownstone and I have had financial power exchange in the past but it wasn’t the “give him money” variety. He had control over how our money was spent, including paying all the bills each month. We’ve moved away from that a bit with a more even split in the financial decision-making, although he’s definitely still The Decider™. Another change is that I pay the bills these days which I kind of don’t mind. (Don’t be shocked — I’m a submissive with control issues.)

No, the fascination is from the idea of people paying vast amounts of money to a Dom with little or nothing “tangible” in return. Either as a one-off kinky thing to do or an ongoing sign of submission. (And yes, “vast” is extremely subjective.)

We’re all adults so I don’t spend time worrying about how people spend their money, but I imagine myself in the same position and my own financial anxieties kick in. I imagine having enough money to do submit like that, and then losing my money in some weird way. Then I imagine what if I made a math error and sent more than I could afford? And then I wonder what it would take to convince me to part with my money – outside of an inherent desire to do so.

I’m not afraid of pain (hi, masochist here), and I’m not opposed to permanently changing something on my body. I’ve got a couple of tattoos, and if I had the budget, I’d have more. Branding is another of those kinks where I fully support other people doing it for themselves but thinking about it gives me second-hand anxiety.

There are different ways to experience branding – temporary or permanent. Some people get fun stuff branded on their skin. At a branding demo, a friend of mine got an outline of a bat on their back that looked really cool. Others use it as part of an owner/slave dynamic where the submissive partner is branded as “property” or with their partner’s mark.

The idea of a temporary brand or something that’s not about ownership or a partner’s “mark” is fine to me. I don’t want to do it because that’s not the kind of pain I’d like to experience, but that’s really all that is.

But the “marking one’s property” kind of brand? That one is more complicated.

In my deepest, darkest kinky fantasies, there’s a lot of non-consent going on. I’ve got kidnap fantasies, gang bang fantasies, deep, dark, scary stuff that I’d never want in real life ever, and that when they happen to real people (outside of consensual non-consent) should be prosecuted to the fullest extent of the law. And being branded non-consensually is part of that.

When I imagine branding in real life (outside of those dark fantasies), I also think, “But what if the relationship ended?” “What if someone saw it and I felt uncomfortable answering?” “How will I feel about it in 50 years?” (Hopefully hella good or at least neutral about it – as I imagine I’ll feel about my tattoos.) Of course, there’s no “right” answer. But again, it feels like more proof of why it’s not my kink. My automatic response is second-hand anxiety with mounting questions.

Have you noticed a theme here? Apparently, I’m fascinated by things that make me nervous.

I blame an overactive imagination and the insatiable need to ask (myself) a million questions. Thankfully, we live in a world where it’s easier than ever to actually find personal accounts and helpful information. The fun, for me, is in the unanswered questions and second-hand anxiety. (I told you…I’m a masochist!) I could learn all I ever wanted to know but then I wouldn’t be able to mindfuck myself about it anymore, either.