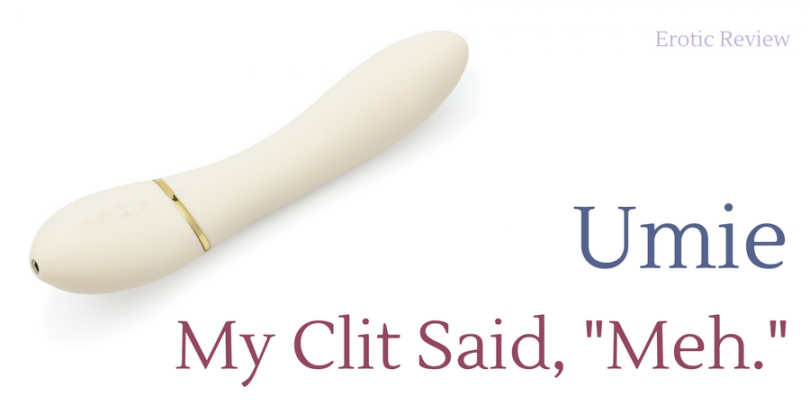 I have a stack of sex toys to try and a self-imposed deadline. Two of the toys left in my stash are from companies I love for a variety of reasons and I’m hoping their products will love me back. Trying a little self-imposed patience, I went for the third option from a company that’s new to me.

The Umie by Tantriss (received in exchange for an honest review) bills itself as “The World’s Smartest Pleasure Device.” It’s always good to start with a heavy dose of skepticism so I didn’t believe for a second this was the world’s “-est” anything. But I try not to judge a toy by it’s marketing.

To be perfectly honest, the Umie is beautiful. It’s sleek and soft in my hand. The shape is absolutely gorgeous. And when turned on, the vibrations go right up my arm.

This should be fun!

Tantriss markets the Umie as smart (in large part) because it can be used with a mobile app – allowing your partner or a stranger control, enjoying different settings, etc. When I try a sex toy that can also be an option for long distance couples, I really want it to work. But I also don’t love playing with a sex toy and a mobile app at the same time. I will if it’s the only way it will work, but it’s not my preference.

My orgasms are about letting go, getting a release of some sort, and unplugging (so to speak) from the daily grind. As someone who lives with her phone in her hand, telling me I need my phone to have an orgasm doesn’t really appeal.

But even with a mobile app I had little interest in trying, Umie made me want to like it because it has a heating element to it. The end warms up – and I’ve learned I love warmth against my clit. Something about it makes my orgasms more intense. It’s a decadent feeling…like a spa treatment for your vulva.

Because I wouldn’t download the app, I refused to be upset about the buttons (four in all) requiring practice and several peeks at the instructions to keep them straight. Pressing the buttons was annoying, so the mobile app would be easier, but I really didn’t want the app.

A few smacks on my ass from John Brownstone and permission to go to bed, with a “Go get yourself off, babygirl” as encouragement, and I was ready.

I fumbled with the buttons, spread my legs, said a prayer to the orgasm deities, and began.

“I forgot my come towel!”

My toes began to curl as pleasure mounted. I begged him to grab the towel. If I think I’ll have to change sheets, I might hold back my own orgasm. A few moments later, he pressed the terrycloth against my bottom with a quiet, “Up.”

Okay, let’s do this thing.

Should I insert it? Why isn’t it heating up? Let’s try this again.

The little bubble of desire had popped, though. No matter what angle I used, which setting I tried, or how hard I pressed it against my clitoris, nothing. Worse, my clit was swollen, popped up, practically begging for attention. Nothing worked.

Penetration was worse. While I could feel the vibrations in my clit to little effect, I felt absolutely nothing inside my body. Every vibration and even the heat became so muted they were almost non-existent.

By the time I gave up, I didn’t even want to get myself off with my hand. Both my clit and I were like, “Meh.” 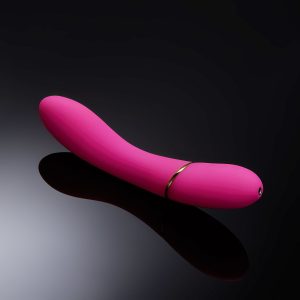 In all fairness, Tantriss doesn’t promise mind-blowing orgasms on their website. But that doesn’t mean it’s not what I wanted.

The design is elegant, and like I said before, it feels good in your hand. According to the website, the heating element can take up to 10 minutes to fully heat up. I can agree with that which is why I kept trying for so long. My hope was that once it was warm, I’d feel more. But it didn’t happen.

Was I having an off day? I don’t think so. Even when I’m not really in the mood, my clit can and will become stimulated until I orgasm. It’s so sensitive that it (usually) takes very little to get me off. Frankly, the fact that I could press the Umie firmly against my vulva says something about the intensity of the vibrations. Penetration is not how I get off usually, and I need a great deal of stimulation against my g-spot to feel much at all – this wasn’t the toy for that, either.

Would you have a different experience? Maybe so. Could I have had another kind of experience with the mobile app? Possibly. But for me, I need a toy to work without the app first. And the Umie couldn’t give me what I needed or wanted.

Curious about the Umie by Tantriss? Check it out here.