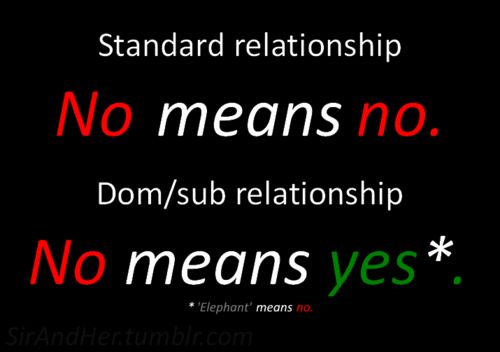 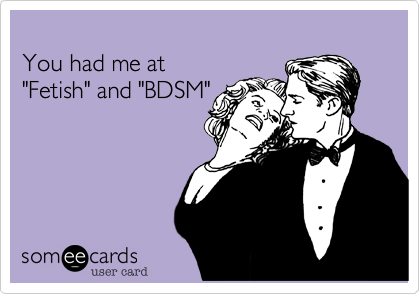 September was National Consent Month (and I am totally going to get a calendar going so I can keep up with this stuff in a better way, jeez!), and as part of our local munch, John Brownstone and I sat through a presentation on informed consent and what that really means.

What is informed consent?

Simply put, it’s understanding what you’re agreeing to. Meaning, before you try a new activity, you should understand how it works, what it might feel like, and how it will be implemented with you. Dominants (or tops) must also understand how to practice said activity in a safe way.

Now, let’s be clear, there’s nothing wrong with both a Dominant and a submissive learning a new activity together. But don’t be stupid about it either. If you’re both curious about flogging and you’ve never done, do not, I repeat, Do. Not. pick up a flogger and start swinging away. Watch videos. Practice on pillows. Go to classes being offered in your local community. And when you’re finally ready to actually practice on your partner, go slowly, lightly, and keep checking in to make sure the other is okay. Basically, proceed with caution.

Cade, the Master making the presentation used his Master/slave relationship as the example. Before his partner could agree to be with him, he had a few requirements. First, she had to play (in some way) with three other Dominants/tops. He does this with new submissives, especially, so they actually know the difference between his style and other people’s – and can decide for themselves whether his style is a good fit for them.

He also mentioned that when it comes to new toys his submissive/slave has never tried, he has a system for describing the pain.  Knowing his own strength, he tests it on them and says, “Where on a scale of 1 to 10, does it feel like for you? This [insert number] is what it feels like to me.”

It was a fascinating look at how one couple (specifically one Dominant) makes sure his partners are fully informed when they consent to do something with him – whether that means being his life partner or simply playing in a scene.

Communication is at the heart of consent.

I see this a lot with submissives who aren’t into pain but they feel like enduring the pain is a way to serve their Dominant. It’s a tricky thing, and everyone has to make that decision for themselves. To me, as long as it’s not an unbearable thing and I’m getting plenty of what I really like, as well, then I am willing to do something I don’t love in order to make him happy. I know what it feels like, I know it’s not my favorite, I allow it anyway. That too is informed consent.

And yes, of course, consent comes down to trust, too. How do you think trust is earned? Communication and holding true to what you say you’ll do. Consistently.

Anytime I hear someone say, “You don’t need to know what I’ve planned” my butt clenches a little. In the case of a relationship where that’s part of the dynamic and play, that’s fine. (And no, you won’t always know from the outside looking in.) But when I hear random online “Doms” spew things like, “I don’t have to tell my submissive anything. She/He will do what they’re told,” well, y’all, that’s when I get mad.

In D/s, we each have a responsibility to the other. A submissive has to learn to speak up (good or bad). If they don’t, their Dominant is flying blind and could make bad decisions that harm rather than help. On the other hand, a Dominant takes on the responsibility of their submissive’s care and well-being – whether it’s for a lifetime commitment or just during that scene.

That sense of responsibility is what leads Dominants to communicate, share, and gain informed consent. Sure, “hurting” your submissive might be a shared kink in your relationship but causing real harm – mental, emotional, or physical – is the last thing any good Dominant wants to do. Those Dominants understand the importance of explaining new activities, testing pain tolerance, and keeping their submissive fully informed so that they that submissive consents, they know what they’re saying yes to.

Everyone’s approach to this is going to be a little different, but any submissive who says, “Do what you want with me, I don’t care!” without a lot of prior negotiation, established trust, and probably many, many years together, isn’t consenting in a safe manner. Any Dominant who doesn’t think they need to share all the details with their submissive isn’t giving their partner the opportunity to give informed consent. Neither scenario is a good idea.