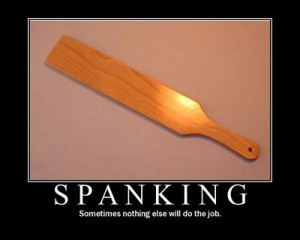 The night started with a spanking. A much-needed, requested spanking. The life-is-crazy-please-make-the-noise-in-my-head-stop kind.

He left me kneeling and naked on the floor. “Don’t move.”

With that tone in his voice? Never.

I heard him rummaging through our closet. With the recent move, the toys haven’t been unpacked yet but they are always accessible. I heard rustling on the bed.

“Okay, babygirl. Time to get into bed.”

I knew, but I didn’t know…ya know? I climbed into bed as he swatted my ass. I stayed on my knees, back arched, pussy and ass presented as I plugged in my phone and pretended to get ready for bed.

“Girl.” A warning tone. My body tingled in response. “Are you teasing me?”

I giggled. Nerves? Maybe. Excitement and anticipation? Most definitely.

Giving him room to join me, I saw something dark peeking out from under the pillow. The paddle? Oh gawd. This was going to hurt. My inner masochist was delighted.

“Over my knee, babygirl.”

I practically pounced as I fell over his lap. My ass had been wiggling for several minutes, and there was no stopping now that I knew the moment of release was close. Think puppy wagging it’s tail. Think first sight of presents under the tree on Christmas morning. Yeah, that kind of wiggly excitement.

He started with his hand (thank gawd) for the first 20 strokes or so. Then the paddle. Each time it became unbearable for me, he switched to his hand again. Then the paddle. Then hand. After 60 strokes, I was a mushy mess in his lap. Blissful. The noise in my head from a hectic week was temporarily silenced.

Between smacks and spanks, there was stroking and soothing of an increasingly moist cunt. I knew what was coming…or thought I did.

After the cuddles and the sweet words, after reassurance that I was a happy babygirl, he was ready for more. Flipping me over on my side, he pulled my hips into his pelvis. Wrapping one arm around my waist, he began to tap and stroke my clit as he fucked me. It felt good, soothing. It wasn’t an over-the-top primal fucking. I relaxed into his arms, happy to let him have his way with me.

Then the thing that happens more often than not caught up to us…the river dried up, so to speak. After a few attempts to coax my body into cooperating, I heard, “Don’t move a muscle.”

More rummaging in the closet. I assumed he was searching for the lube supply. I was wrong. 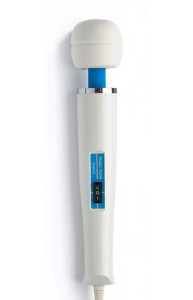 I opened my eyes when I heard him moving around on my side of the bed. My eyes widened with shocked pleasure. The Magic Wand. The blessed, amazing, painful, torturous wand. I think I squeaked because he chuckled.

I begged for a towel. He complied. Once the thick fabric was under my ass, he pushed my knees apart. “Spread those legs, girl.”

There was little warm up, little preparation. He rolled the buzzing head down my mound, over my slit, and landed squarely on my clit and within seconds, I was gasping for air. Fire and desire streaked from the soles of my feet to the top of my head. Every bit of burning pressure centered around the wand and my clit.

The first orgasm took my breath away. By the second, I was swallowing screeches and screams. At the third, I was clutching his arm and inexplicably closing my thighs around the head. I thought it would relieve the tension. I was wrong.

Lights exploded behind my eyes. My entire body spasmed as fluid gushed between my thighs. The noises coming from me were inhuman. Gawd, it felt so good.

He pulled it away from my clit. My poor, tortured, but greedy for more clit. Joining me in the bed again, we assumed our earlier position. This time, as he thrust in and out, he held the wand between our bodies. (Guess who’s discovered the joys of the magic wand, too?)

A few thrusts, and I was done. I became a mushy lump in the bed.

He pulled out and rolled over onto his back. He still had the wand in his hand. Seconds later, I heard moaning. I managed to peek over my shoulder in time to witness his own magic moment with the wand as he rolled the head up and down his shaft.

I giggled to myself.

Several minutes later, he shouted out his pleasure and covered his stomach and chest with his own fluids. The buzzing stopped.

“Did you enjoy yourself?” I was turned on and fascinated by what had just happened. And slightly amused. My adventurous Daddy Dom took care of himself in a big way.

“I was milked by that thing. Holy fuck.”

“Daddy?? Can I have more, please?” I held up the wand and looked into his eyes, hoping to convey desire, masochism, and hell, a little bit of puppy-dog-eyes pleading.

Lowest setting, I gingerly brought the tip towards my lips, rolling it up and down my slit. With the barest pressure, I placed it over my clit. That was all I needed.

The first orgasm snuck up on me but it was huge. My toes curled and my free hand gripped the edge of the towel. I squirted…and squirted…and gushed. The wand made a gurgly sound as fluids continued to pour from my body. My eyes squeezed shut as I clenched my jaw against the screams that threatened to erupt. 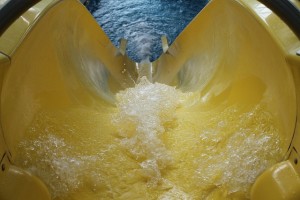 When I could take no more, I pulled it away. He took it from my hands. A silly giggle escaped my lips and I stared bleary-eyed up at him.

“I think I got the towel wet, Daddy.”

“More than that, babygirl. You completely soaked it and the bed.”

He placed a clean, dry towel under me and gave me water. He tucked me in and settled into bed with me. I don’t remember a thing after that. Between the spanking, the orgasms, the wand, and his own bit of fun, the noise in my head was shut down, and I fell into the deepest sleep I’ve had in weeks.

And it all started with a spanking.

Disclaimer: Post sponsored and paid for by Maxi Wand, a Magic Wand authorized retailer. The experiences, opinions, and crazy-love for the wand are all my own. Yes, this really happened. (For all my UK friends and readers, you can’t get the Magic Wand through Maxi Wand…BUT there is a UK version called the UK Wand.)