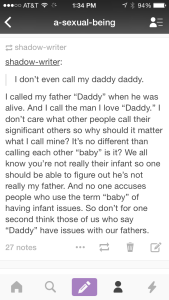 In other words, I call him Daddy – do you have a problem with that?

For me to respond to something, anything, online completely unsolicited, it has to have pushed a button. This pushed my buttons. It wasn’t the statement so much as the tags the writer used. One being #eww. This was my response.

I actually broke out into a sweat about it. When I say I’m non-confrontational, I mean that I don’t ever just share my opinion with a complete stranger outside of my own turf. Here on the pages of my own paid-for website? Hell yeah. To something my friends or colleagues say on social media – in response to a question? Sure. In response to someone else, in an open forum? Hell no. But I did.

So why did I make what amounts to a fairly mild statement about the term “Daddy?” Because I’m tired of the double standard.

I called my ex-husband ‘baby’ and no one blinked an eye. But if the vanillas (definitely my own family) heard me call John Brownstone ‘Daddy,’ at best, I’d get strange looks and at worst, something would be said. Have I mentioned I detest confrontation?

Here’s the deal. I call my Dominant, my lover, the man I cherish above all others, “Daddy.”

I don’t have Daddy issues. My father, dead these 13 years was a good (albeit flawed) man. I was Daddy’s Girl. I adored that man and would give anything to have him back. I think he would respect John and would appreciate how good we are together. It would, however, be strange to me to have my daddy and my Daddy, but it’s wouldn’t stop me, either.

In the vanilla world he’s John or Mr. John (when I’m dealing with the boys since that’s the name they use for him). I say Mr. John so often that I sometimes slip and use it when we’re alone, too. I think it works well because it’s used as a sign of respect.

The only time I call him “Daddy” is when we’re alone or we’re surrounded by fellow kinksters. I try to be respectful of people’s discomfort with names and terms that are unfamiliar to them.

When I saw the post on Tumblr with the accompanying hashtag, something snapped. I called my ex-husband ‘baby’ for our entire relationship (it was quite accurate, too). No one ever questioned it. No one ever gave me a funny look or made assumptions about me. No one who uses that term is labeled as having infant issues.

I call him Daddy because it’s a term that works for both of us and it fits who we are as a D/s couple. The outside world may just have to get over it.